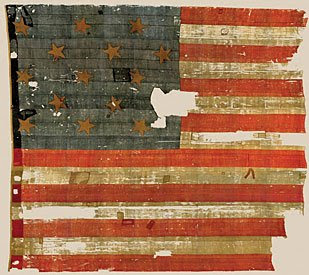 It's Flag Day and Jules Crittenden has a kickass roundup!

I've got to say, in light of the news coming out of Iran, I'm even more grateful than ever to fly my flag today.

In fact, I'll quote my own blog when back in April I wrote about Leo Thorsness and his time in captivity. His cellmate Mike brought them to tears when he scrounged together items to make a flag; this is from Surviving Hell: A Pow's Journey:

Put out your flag today!
Posted by Pat Austin Becker at 8:24 AM

Not only is it Flag Day, it's the U.S. Army's birthday.