Not Everyone Goes to Palau or Bermuda... 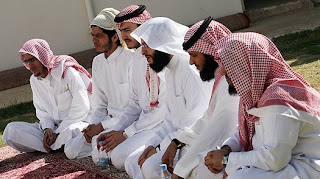 The Washington Post today is reporting that the Obama administration has all but given up on bringing Gitmo terrorists into the United States except for trial. With the settlement yesterday of four Uighurs in Bermuda and with the other thirteen likely going to Palau, he has lightened his burden at Gitmo by 17. Call it 18 when you count the detainee brought to Manhatten for trial this week.

Of course, the British remain angry about the Bermuda deal, but no worries, Hillary has now talked to them to alleviate their fears. No word yet on how that went.

The Wall Street Journal wrote yesterday that the administration is now nearing a deal with Saudi Arabia to take many of the 100 Yemeni detainees who remain at Gitmo. Supposedly the Yemenis would enter one of the Saudi rehabilitation programs. Yemen has asked the U.S. for financial assistance to establish a rehabilitation program similar to that of the Saudi's but so far, the U.S. has resisted that option.

"Yemen's President Saleh has been seeking U.S. financial assistance for Sana'a to establish its own rehabilitation program for many of its detainees held in Guantanamo. Yemeni officials said the program includes religious education, vocational training and family reunification. The program is partly modeled on the system Saudi Arabia has developed to reform al Qaeda and other Islamic militants initially detained at Guantanamo or captured inside the Arab kingdom.U.S. officials have questioned Yemen's ability to finance and oversee such a program."

The recidivism rate from Yemeni programs has been horrible.

Yet the the terrorists are supposedly going to Saudi Arabia, not Yemen, should this deal be met. Yemen and Saudi Arabia are closely linked and it's unclear what, if any, guarantees would be in place to assure that these terrorists are not released early, or escape, as is their program record, to re-enter the world of jihad.

Saudi Arabia's rehabilitation program is, of course, no guarantee that these Yemenis will go straight. Eleven former Gitmo detainees who went through the program are now currently on "most-wanted" watch lists. Yemen is a huge terrorist recruiting playground - and again, what are our guarantees that these guys won't end up right back there?

The Weekly Standard, in a February 2009 article, pointed to three Yemini detainees who are "typical" of the Gitmo Yemeni population.

Abdul Rahman Umir al Qyati answered the call for jihad in Afghanistan. He trained at al Qaeda's infamous al Farouq camp and then became a guard at the Kandahar airport in 2001. At that time, the airport was a stronghold for Osama bin Laden, and only the most trustworthy recruits were given guard duties there. Al Qyati "holds the United States in disdain" and admits "that if another call for jihad were issued he would comply even if it meant killing Americans and destroying U.S. interests."

Majid Abdu Ahmed also answered a Yemeni cleric's call for jihad in Afghanistan. During his time in U.S. detention, Ahmed referred to his interviewing agents as "infidels" and explained "that all Americans are infidels, and they will go to hell." Ahmed told his interviewers that the September 11 attacks "were very small in scale and he wishes for greater destruction and torture to fall upon Americans."

Adil Said al Haj Obeid al Busayss is an admitted Taliban member who attended a training camp in late 2000 and then fought on the front lines in Afghanistan. Busayss sees the entire world as a battlefield for jihadist forces to conquer. When a non-Islamic country falls, its inhabitants will have three choices: pay a tax for their infidel beliefs, leave the country, or convert to radical Islam. Anyone who refuses to submit will be killed.

Yet the Saudi rehabilitation program is supposedly fairly effective. Not perfect, but effective.

According to Time, "The Pentagon says it will not change its policy on repatriating Gitmo detainees to Saudi Arabia. 'There are never any absolute guarantees,' said Navy spokesman Commander Jeffrey Gordon. "There's an inherent risk in all detainee transfers and releases from Guantánamo.'" My question is, why take the risk?

One of the spokesmen for the Saudi program, "claims the program's success stemmed from its guiding principle that jihadis are victims, rather than villains. " Seriously? They are victims? Tell that to the families of 9/11 or the USS Cole.

60 Minutes recently did a program on the Saudi rehabilitation program; as expected it was very favorable. They also addressed the recidivism rate, pointing out that "11 of 117 men returned from Guantanamo have shown up again on Saudi Arabia's list of most wanted terrorists. You can call that a 10% failure rate or you can call that a 90% success rate...Mohammed Al Awfi became a colossal embarrassment to the soft approach. Awfi came back from six years in Guantanamo in a back brace, went through rehabilitation, but then traded the back brace for a bandoleer, and along with another graduate of the program, showed up in Yemen on an Al Qaeda video denouncing the Saudi government."

What I'm wondering at this point is not so much how successful the program in Saudi Arabia is, but what kind of deal Obama has had to make with them to get them to take the Yemenis. Are the Saudi's so anxious to take them? Why would that be? What kind of sweetener are we adding to the deal? If we're giving Palau $200 million, what are we offering Saudi Arabia? Is throwing Israel under the bus part of the deal? Just askin'.

The only "absolute guarantee" I can see to keep these guys from returning to terrorism would be continued detention at Gitmo which even Eric Holder called "a model prison."

Posted by Pat Austin Becker at 9:51 AM

The actual message of Obama's actions toward detainees: "If you are in the armed forces and you capture a prisoner you are not thinking very clearly. You plainly do not value your life nor that of your fellow soldiers and fellow citizens."

Wow what a clusterfork this has turned out to be. Looks like the One has stepped in number Two...