The Surreal Presidency and the Bermuda Triangle 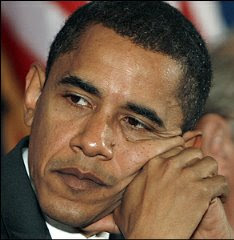 This whole detainee transfer business this week has been just surreal to me. In fact, lots of things have felt that way since November, but this one just has me, well, I was going to say speechless but that's not true because I've written about it a lot. I guess I'm just incredulous.

Go back to the campaign when Obama first promised to close Guantanamo. He said this in May 2007:

"We need to bring to a close this sad chapter in American history, and begin a chapter that passes the might of our military to the freedom of our diplomacy and the power of our alliances. And while we are at it, we can close down Guantanamo and we can restore habeas corpus and we can lead with our ideas and our values."

"While we're at it," he said, "we're going to close Guantanamo. And we're going to restore habeas corpus. ... We're going to lead by example _ by not just word but by deed. That's our vision for the future."

Okay so January 22 he signs the Executive Order that closes Gitmo. The Order says it is "consistent with the national security and foreign policy interests of the United States and the interests of justice."

"In view of the significant concerns raised by these detentions, both within the United States and internationally, prompt and appropriate disposition of the individuals currently detained at Guantánamo and closure of the facilities in which they are detained would further the national security and foreign policy interests of the United States and the interests of justice. Merely closing the facilities without promptly determining the appropriate disposition of the individuals detained would not adequately serve those interests. To the extent practicable, the prompt and appropriate disposition of the individuals detained at Guantánamo should precede the closure of the detention facilities at Guantánamo."

Stop there for a minute. There's no plan as to what we're going to do with these enemy combatants; there never was. What he's saying here is that there are "concerns" about these detentions both here and abroad and that closure of Gitmo will "further the national security and foreign policy interests of the United States..."

How's that working out for you today, Mr. Obama?

So far over 100 countries have refused to take these enemy combatants off your hands, specifically the Uighurs.

How do we solve that problem? We pay Palau $200 million to take 13 of them and we dump four off in Bermuda. Oh, but there's a problem there, too. Our United States government LIED to Britain about that. We purposely deceived them for their own good. A senior U.S. official "told the BBC that Washington was attempting to shield the UK from Chinese anger." China considers the Uighurs terrorists and would like to have them back. We were just trying to help the UK by lying to them.

With friends like that, you don't need enemies. I've discussed ad nauseum why the Uighurs are terrorists as has Thomas Joselyn at The Weekly Standard, among others. I'm not going back into that in this post. It's not even a negotiable topic. They are trained terrorists. Period.

The point here is that Obama has lied not just to the UK, but to the American people. The White House put out the story that this was a nice, happy deal. The premier of Bermuda put out a nice statement about what good friends we all are. When the flaming bag of poo hit the fan, Ed Morrissey rightly points out that "the White House tried to spin it by claiming they thought Bermuda’s premier had included the UK in their end of the discussions. "

First of all, the White House should have handled that and not farmed it out to Bermuda. That's pure incompetence, unless of course, we weren't planning on telling the UK in the first place.

If we are going to "lead with our ideas and our values" as Campaign Obama stated, is this what we can expect for the duration of his reign? Lies? Deception? Is that what our values are, now? If he's lying to the UK don't you think he's lying to us, too? Let's talk about the health care lie - or not. We'll save that one for another post. But he's lying to you.

Do not throw that argument at me that Bush lied. It's tired. It's been done. And resolved. And it detracts from this particular issue. Bush wasn't perfect and nobody says he was. But he kept us safe. And a lie from Bush does not excuse one from Obama.

The biggest thing I had against Candidate Obama was his stance on national security and while he has retained many of the policies of the Bush administration, I believe that his position on Gitmo and terrorist release is a poor one. He's turning it all back into a law enforcement problem (Mirandizing enemy combatants on the battlefield for crying out loud!) which is exactly, undeniably what led us to 9/11. It doesn't take a rocket scientist to see that this is a bad plan. It didn't work before and Americans died. Why is Obama choosing to take us down this path again?

All politicians lie, of course. But this one goes further because it alienates our ally Britain. Talk about making us look poorly in the eyes of the world - he thought Gitmo did, but what will other countries think about being lied to? This Bermuda Triangle puts the UK in China's crosshairs because they want the Uighurs.

Meanwhile, we're shipping the rest of the Uighurs, along with a lot of cash, to Palau. We're turning murderers over to the Saudis. And we've brought one to Manhatten, who incidentally could theoretically get a "not guilty" verdict and walk free.

It seems to me that the new Gitmo plan is unlock the doors. Alienate our allies. Suck up to terrorist dictators and ignore their actions that promise to endanger the world.

Do you feel safer now?

Great take. How quickly folks forget that Russia had admitted to transporting weapons-grade materials from Iraq into Syria, that Katrina and the tsunami were both natural disasters, or that Thomas Jefferson was also a terrible public speaker. But the left would rather continue hurling aimless bile at President Bush than acknowledge the amateurish mistakes of their god made flesh. It's sickening to hear the left talk about what amounts to a mandate from heaven. Apparently, it's not sickening to them to provide housing, care, and now, relocation to tropical paradises, for terrorists whose own countries refuse to readmit them.

Pat, awesome. Linked to you. Keep it up. Thanks.