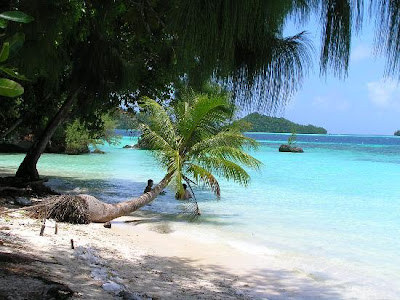 From NRO's The Corner:

"The Associated Press has learned the Obama administration is in talks with the remote South Pacific island nation of Palau (PA’-lau) to resettle some or all of 17 Chinese Muslims now held at the Guantanamo Bay detention facility. . . The officials spoke on condition of anonymity due to the delicacy of the negotiations. They said the U.S. is prepared to give Palau up to $200 million in aid to accept the Uighurs. Palau is an independent nation about 500 miles east of the Philippines that has close ties with the U.S."

$200 million? Good grief. Let's just auction them off on eBay.

How much will it cost to send Jeff Probst with them?

I'm sure the murderous terrorists would stay on the island if they were told to. The extra plus for Obama is that he would get yet another chance to waste a large wad of taxpayer money.
It' a win/win for Obama. Absolute worst case scenario is the Uighurs could kill 10,000 to 20,000 innocents. (This, of course, assumes they can't get their hands on nukes.)