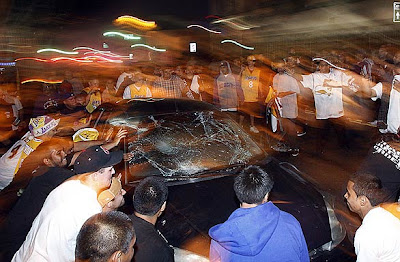 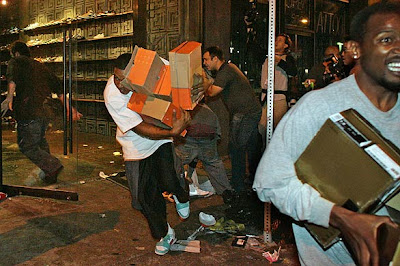 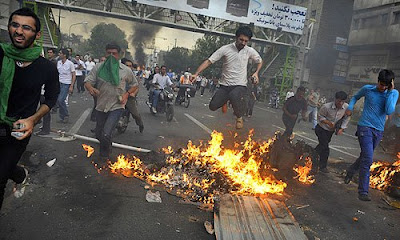 Which of the three pictures is Iran and which is Los Angeles?

Which one LOOKS like New Orleans after Katrina but is really Los Angeles after the Lakers victory last night?

Speaking of losers, let me just say a word about the poor media coverage of the Iranian situation. I know others have commented on that too, but night before last when this all began to break, I turned on Fox for...news (go figure) and they had a rerun of Huckabee. Last night I turned on Fox and found a rerun of Hannity. CNN did a bit better last night with minimal coverage and then a rerun (twice) of a September 2008 interview with "Amanutjob" and Larry King.

I know that the current situation doesn't exactly permit journalists broadcasting from the streets right now, but for crying out loud! These networks did 24/7 coverage on Natalee Holloway, OJ driving down the freeway, and Hurricane Katrina, to name a few. I know they can do more thorough coverage of what's happening in Iran. Even the New York Times noticed the lack of television coverage.

Thank goodness for Twitter (#iranelection) and for Michael Totten.

I'm really glad that Roxana Saberi is out of Iran right now. I'm sure she is, too!

Meanwhile, speaking of Iran, Dennis Ross, who served as special envoy to Iran, has been relieved of his duties and reassigned. Pam Gellar has the story.

All I can think when I see those pictures is of Celine Dion saying, "Let them touch those things for once." LOL Remember that? Ridiculous!!