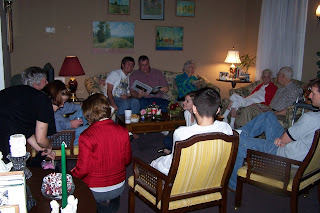 I think I may have survived Christmas; we had our great-family-get-together last night and all went well. There was an obscene amount of food and sweet stuff to eat and as far as I could tell, everyone ate -- including Checkers. I'm not planning on cooking anything else for months.

We did presents after we ate and that we fun; my niece's child was adorable as he passed out everyone's presents. He wanted to open all of them, which of course, he did. He didn't care what was in them, he just wanted to rip the paper. Nikki gave me a gift certificate for a blog make-over from Penny Lane Designs which I'm excited about. Nikki recently had a design done for HER blog and it's awesome. I'll have to get to work figuring out what I want for mine!

pril; the Teenager was in heaven with that one. As soon as he opened his ticket, he put it on the carpet and took a picture of it to email to his friends.

This morning Nikki, Brett and the Teenager played Rock Band; then life went back to normal. The Teenager went to work and all the Dallas people headed westward, down the highway. And Checkers and I hit the couch.

Today I feel like a zombie. After weeks of baking, cooking and cleaning, I'm planning to spend the rest of my Christmas break on the couch, under my down blanket with a dog on my feet and a book in my hand.
Posted by Pat Austin Becker at 3:49 PM

That is NOT a good picture of me!!

yall look and sound like you had a blast...

did you send me any food home?

and nikki is very fiona apple-esque in that pic....