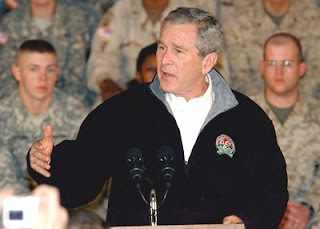 Say what you will about George W. Bush, but my contention has always been that it is history that will be his judge and not us, and thankfully, not the mainstream media.

As "W" prepares to leave office, I have to imagine he is ready to retire to a quieter life. I would imagine he is ready to spend time with his family, his daughters, his new son-in-law, maybe grandchildren down the line. If I were George Bush, I'd be ready to move away from the constant criticism in the press; but I also imagine that he has tougher skin than I do.

I was not surprised to see this story today about how he has written a personal letter to each family of each fallen soldier in the war on terror. He has met and visited with many of them, often in private. I appreciate how he accepts this as not just his duty, but as something he just has to do. I believe he honestly appreciates and acknowledges the sacrifice that each and every family has made in the campaign to keep America safe. And again, say what you will about him, but his efforts have kept America safe.

I'm not going to judge Barack Obama at all until he gets in office and does something that he should be criticized for; I'll also give him a nod when he does something right. I've agreed and disagreed with some of his cabinet picks and I think this whole "Office of the President Elect" junk is just silly - the whole faux-seal and all. Silly. But it seems that as Obama has received real security briefings, he is slightly adjusting his stance on the war. I mean, I haven't heard him clamoring for an exact date for withdrawal lately. But I could have missed it. Not that he's going to pick up where Bush left off by any means, but he's not as adament on withdrawal as he once was, either.

What I've appreciated about George W. Bush is that he does love and appreciate the military, the soldiers and the families that have sacrificed. He's been far from perfect, of course, but he's done a lot that's right. There's nothing that could ease the pain of a parent who has lost a son or daughter in war, but somehow, knowing that their commander-in-chief at least noticed is something. Knowing that he didn't delegate the condolence letters to his staff or send a form letter is also something.
Posted by Pat Austin Becker at 4:38 PM

you know, there is a part of me that really feels bad for GW. I cant imagine what it would be like to run a country, find yourself the president of war, and make it through it all with hair still in tact and without loosing my sanity. I have never thought that GW expected any of this, and i would never wish what he had to go through on anyone....

that being said, thank god he is on his way out!

And we're suppose to be happy with what's coming in?