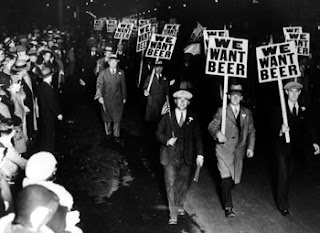 On this day in 1933: the end of prohibition! From History.com:

The 21st Amendment to the U.S. Constitution is ratified, repealing the 18th Amendment and bringing an end to the era of national prohibition of alcohol in America. At 5:32 p.m. EST, Utah became the 36th state to ratify the amendment, achieving the requisite three-fourths majority of states' approval. Pennsylvania and Ohio had ratified it earlier in the day.

And I am doing my part to celebrate the day.
Posted by Pat Austin Becker at 7:06 PM