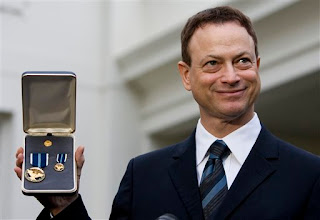 Actor Gary Sinise, aka Lt. Dan, received the Presidential Citizens Medal today from President Bush. I was pleased to see this because everything I know about Sinise is that he is a true patriot and all 'round good-guy. He is probably most known for his role in Forest Gump but if you ask a lot of service men and women they might say he is best known for the support and love he has shown them.

Steve can probably speak to this better, but Sinise and his Lt. Dan Band appeared at Fort Polk when Steve was stationed there and Steve had nothing but good things to say about the guy. Sinise takes his Lt. Dan Band tirelessly around the globe on USO tours to entertain the troops. He has also visited soldiers in Walter Reed and also the Navy Medical Center in Maryland. He has visited with Iraqi school children and with author Laura Hillenbrand (Seabiscuit) founded the Operation Iraqi Children Program which provides school supplies to Iraqi children.

The Presidential Citizens Medal was established in 1969 to recognize U.S. citizens who have performed exemplary deeds of service for the nation; it is one of the highest honors a civilian can receive from the President, second only to the Medal of Freedom.

Good call by President Bush on this one! As Bill O'Reilly would say, Mr. Sinise is a patriot!
Posted by Pat Austin Becker at 5:34 PM

I have admired him for a while now - he used to (may still be) on Laura Ingraham's show every few weeks and on top of all of it, he was just so humble!

On a totally unrelated note, looks like we're in for about four years of Chicago politics at their best...I doubt there will be much time for honoring people like GS.

It's ironic that Sarah would mention Gary Sinise and Chicago in the same blog, because Gary is from Chicago.

The show I saw at Ft Puke, er I mean Polk, was great. The band and singers sang all types of songs from rap, pop, rock, and country. It sort of reminded me of a Lawrence Welk Show.

When Gary introduced the guitarist, and I wish I remembered his name (he was really good), he said the guitarist was a Vietnam Vet, the audience in the post theather, where the show was performed, erupted in cheers and HOOAHS! (Hooah! it's and Army thing that will need some explaining).

What was so weird about the whole show, and I sat close to the stage, was here was Gary Sinise, movie star, famous guy, etc, but all he did was introduce the song, the singer, stood back, played his bass guitar and let the others be the stars of the show.

The only time Gary came forward was during intermission and explained why he was doing what he was doing and how important it was to support the troops and a program formed that was supplying school supplies to Iraqi children.

Never, during the whole two hours, was it ever about Gary Sinise. He never let it be about him, he made it about us (the soldiers and the causes he believes in).

That is why I have nothing but good things to say about Gary Sinise.

So to all my brothers and sisters who have, are, and will wear the uniform of this great country, and to people like Gary Sinise, "HOOAH!"

Steve - great story! He just seems like such a classy guy.

I had no idea he was from Chicago!