Full Metal Jacket Reach Around: The Saints vs. Cowboys Edition 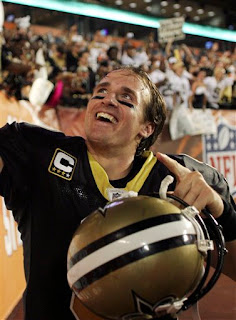 My daughter was lamenting the rise of "bandwagon fans" with regard to the Saints this week. She and her husband are arriving from Dallas this afternoon and we'll do Christmas with my mom this afternoon. In discussing what we'll do this evening, she said, "The Saints/Cowboys game is on Saturday night." I was unaware, actually. Saturday night? What's up with that?

Today I have a bit of cooking to do for our festivities - nothing major. I've pretty much given up on the spirit of Christmas finding me this year after the god-awful week we've had around here. The best I can hope for at this point is to just get through it all and look forward to next year. I'm not doing the big Christmas party I usually do, and I've done almost none of the baking I usually do. But it'll be okay - next year I'm sure I'll go overboard.

Let's get on to the links so I can go pick up a couple of last minute gifts and get my cooking done!

I live in Louisiana so I NEVER EVER see snow like this or this or this. I'll be glued to Fishersville Mike's coverage of the great blizzard this weekend! I think it's gorgeous, but I'm sure it causes problems, too.

Reaganite Republican has the story of a Twitter hack job.

Professor Jacobson is asking for twitter updates on Reid-Care as he drives! One if by land, two if by sea!

No Sheeples Here could almost get me into the Christmas spirit this year with these adorable pictures! She's got a massive round-up, too.

Another Black Conservative shares his thoughts on Obama's Copenhagen speech as does Stacy McCain.

Stacy McCain announces the engagement of his beautiful daughter.

Gateway Pundit wonders if Kevin Jennings will help the New Jersey girl who was told not to read her Bible at school.

Donald Douglas has a review of the movie Precious. Kinda makes me want to see it now.

Pundette has a great, and weather appropriate, clip from one of my favorite Christmas movies, and also updates on today's Senate actions.

Carolyn Tackett, like me, doesn't have to worry about snow this weekend, but she does have a great Marco Rubio clip.

Troglopundit closely analyzes Obama's Copenhagen speech. Not what he said, but how he said it!

Wyblog has five questions for proponents of Obamacare.

Grandpa John is promoting blog wars.
Posted by Pat Austin Becker at 8:04 AM

Thanks for the links. And go Saints.

I hope you have the NFL channel! I don't on my cable and I am stressing about missing the game. My facebook friends are going to keep me informed.

Thanks! I can't take the credit for the fantabulous art though. That's my talented Husband keeping my blog looking right.
Oh Costco, how I miss thee.