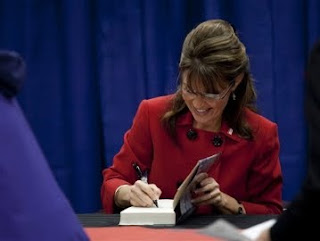 Via Ben Smith, Stanley Fish has posted his review of Going Rogue, and ... he liked it.

I'm reading the book right now and so far I'd have to say that I'm with Mr. Fish on his critique of Going Rogue. The word that sticks in the back of my mind is "breezy." So far, at least, there's nothing really deep or thought provoking on a political level. It's just as its subtitle says, it's the story of "An American Life."

Fish puts it this way - he says that Palin feels that:

Political success is an accident that says nothing about you. Success as a wife, mother and citizen says everything.

Do I believe any of this? It doesn’t matter. What matters is that she does, and that her readers feel they are hearing an authentic voice. I find the voice undeniably authentic (yes, I know the book was written “with the help” of Lynn Vincent, but many books, including my most recent one, are put together by an editor). It is the voice of small-town America, with its folk wisdom, regional pride, common sense, distrust of rhetoric (itself a rhetorical trope), love of country and instinctive (not doctrinal) piety. It says, here are some of the great things that have happened to me, but they are not what makes my life great and American. (“An American life is an extraordinary life.”) It says, don’t you agree with me that family, freedom and the beauties of nature are what sustain us? And it also says, vote for me next time. For it is the voice of a politician, of the little girl who thought she could fly, tried it, scraped her knees, dusted herself off and “kept walking.”

I'm enjoying the book and still recommend it. It's not a "political book" as you would normally think of it; and regardless of how you feel about Palin's politics or viability in the Republican party, she IS an authentic voice and she does have a role to play in the conservative movement.

Read the rest of Fish's review.

I’ve read "Going Rogue" and it’s Sarah’s story about her life and family, to date. It’s refreshingly personal and reflects her character. Not by any means an ideological tome. It struck me as genuine. At the least, it’s a great “visitors guide” to Alaska.

I'm reading the book now. Enjoy it, but it's not a real page turner!