Jennings Does Not Get a Pass on FISTGATE 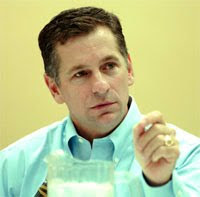 Jim Hoft points out that this conference was "sponsored by the Gay, Lesbian, and Straight Education Network (GLSEN) [and] was fully supported by the Massachusetts Department of Education, the Safe Schools Program, the Governor’s Commission on Gay and Lesbian Youth...".

According to Media Matters, Jennings knew nothing about the content of that conference, even though he didn't resign his post as Executive Director of GLSEN until 2008.

The "sexuality instructor" of that conference was Margot Abels, an employee of the Massachusettes Department of Public Health. Jennings's defenders contend that Jennings was blissfully unaware of the work of Ms. Abels - yet allowed her to speak to teens at this conference anyway:

But the statements MassResistance cites Abels reportedly making only indicate that her immediate supervisors in the Department of Education were aware of her work - not Jennings or other GLSEN officials.

We're to believe that GLSEN sponsored a conference and allowed Ms. Abels to conduct a sexuality seminar, yet they were unware of her work?

Jennings did not resign his post as Executive Director of GLSEN until 2008, which, to me, makes him responsible. The buck stops here.

If he didn't know, he should have. To allow someone to speak to teenagers about sexuality and not check out their background or positions on such subjects is nothing short of irresponsible. As a teacher, I would never allow anyone into my classroom to speak to students without checking out what they were going to say and what their positions might be on such sensitive topics.

And even if you DO want to give Jennings a pass on that - the reading materials recommended for school kids on the GLSEN site were pornographic before Jennings stepped down in 2008, and they still are.

No pass for Jennings on this one.