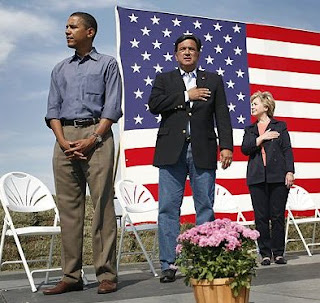 It didn't take long for the Rick Perry attacks to begin.  Less than 24 hours, really.

A quick perusal through Memeorandum shows:

Michelle Goldberg at The Daily Beast is drumming up paranoia about Perry and Bachmann's Christian beliefs:

We have not seen this sort of thing at the highest levels of the Republican Party before. Those of us who wrote about the Christian fundamentalist influence on the Bush administration were alarmed that one of his advisers, Marvin Olasky, was associated with Christian Reconstructionism. It seemed unthinkable, at the time, that an American president was taking advice from even a single person whose ideas were so inimical to democracy. Few of us imagined that someone who actually championed such ideas would have a shot at the White House. It turns out we weren’t paranoid enough. If Bush eroded the separation of church and state, the GOP is now poised to nominate someone who will mount an all-out assault on it. We need to take their beliefs seriously, because they certainly do.

Really, I thought we quit worrying about a president's religious beliefs when America elected a Catholic.

Matthew Yglesias has sifted through Rick Perry's Fed Up

to find "The Ten Strangest Ideas" in the book.  He primarily knocks Perry's belief in states' rights, which I don't find strange at all.

Even Karl Rove seems to suggest that Perry isn't electable in the general election.  Does he think Palin is?

Paul Krugman attacks Perry's record of job growth in Texas.  Because Obama's is so much better?

He got a lot of applause for that line, by the way.

The obvious implication is that America's roughly 3 million active-duty and reserve soldiers, sailors, airmen and Marines don't respect President Barack Obama—whose administration drew down their numbers in Iraq and Afghanistan, revamped the Department of Veterans Affairs, increased Pentagon funding, and oversaw the operation that killed Osama bin Laden. Is Perry for real?

Weinstein claims that 37% of service members polled by Gallup approved of Obama.  In Weinstein's world, this is apparently a positive approval rating.  It's okay, you see, because at one time George W. Bush "the exact same approval numbers"!  Eureka!

Americans who currently serve or previously served in the U.S. military are less likely to approve of the job President Obama is doing than are those who have not served in the military, by about 10 percentage points. This approval gap occurs across age groups.

And of course, the problem with that whole polling of the military thing is that it's racist or something:

(It's also worth noting that, despite major gains by women and minorities in recent years, the military is overwhelmingly white, male, and Protestant, a demographic that never polls well for Obama.)

Weinstein's pitiful excuse that Perry is just beating up on Obama is weak:

But Perry's "respect" jibe isn't about the facts: It's about painting a beleaguered president as effeminate and indecisive.

Poor "beleaguered" and "embattled" Obama.  It's good that he has the media to take up for him.  Maybe he can gain a second wind while hanging out with the millionaires and billlionaires at Martha's Vineyard this month.  Nothing like a nice corporate jet, waygu beef, golfing vacation hob nobbing with the wealthy and getting away from the little people to re-energize yourself.

Weinstein suggests Obama campaign on his national security achievements.  No, I'm not making that up.

By all means, I think he should.  Let's throw Joe Biden in the argument, too, who put the finger on Seal Team Six.

If we're "fact checking" Perry's statement, I think Mr. Weinstein stands corrected and Perry is correct.  There's not a high level of respect for Obama among the military as a rule.

Let's do some unscientific polling here.  Are you military?  Ex-military?  Retired?  What do you think?

Paul Krugman... To borrow the quote from someone he's to economics as John Kerry is to Vietnam service!
:<)

I am a former service member. I have no respect for Obama as a person or as a President. I understand that Rick Perry is a former air force pilot, who served with honor, therefore deserves our respect.

I think Rove is wrong. I think that he can beat Obama in the general election.

I just looked on line at Paul Krugman's biography and didn't see where he wore a military uniform for this or any other country. I may be wrong, but I doubt it. So, on behalf of my fellow veterans, Paul Krugman can kiss our collective asses!

I'm retired USAF and I'm most certainly glad I didn't have to serve under Obama. Carter was bad enough; I couldn't take a Second Coming.

I'm over Karl Rove too. I'm over anyone in the GOP who knocks Bachmann/Palin/Tea Party and hell, even crazy little Ron Paul. These people are actually trying to represent people, not telling people what they should be. I'm tired of the "crazy" talk. If it weren't for "crazy" people, none of us would be here.

My husband has 16 years in as active duty AF and I can tell you NOT ONE of our friends supports Obama. They act respectful towards him of course, because he is their commander in chief, but support him? No way.