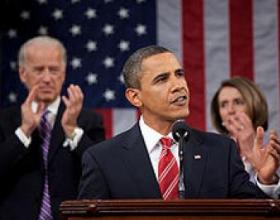 If you could somehow promise him right now that he’ll get a second term no matter what happens with jobs, he’d tear the speech up and watch the Packers/Saints game himself. Pathetic.

This political stunt by Obama over who gets the Wednesday night airwaves is just so pathetic one is almost (but not quite) embarrassed for Obama.  Does he not have handlers that can avoid such a blunder as this?  Did he think everyone would drop dead and bow when he decided that being a demagogue and trumping a presidential debate would be a good idea?

Yes, the debate is one of many in an election over a year away.

But it's Rick Perry's debut on the debate stage!

And the next night is the NFL season opener!

And who really cares what Obama is going to say anyway?  I've not seen his speech but I can bet it's loaded with self-important blather and much repeated bromides that we've heard over and over and over.  It won't change anything (at least in a positive way).    My own over/under on how many times he says "I"?  45.

Truthfully, if this guy wants to help the nation, he could just take a seat.  Go to the house.  Back to Chicago.  Leave us alone.  Thanks, but no thanks.  See ya.

He should look up "petty" and "transparent" in the dictionary.
Posted by Pat Austin Becker at 5:22 PM

"Go to the house." LOL! This made me laugh! My grandmother always said "to the house" instead of "home". I've long been curious whether it is an Okie-ism or a dairy farmer-ism. Any thoughts?

Back on topic: It was truly inspired of Boehner to ask him to move it to Football night!

Now if the thing is pushed to Thursday NBC is in a massive quandary.  If they preempt  the NFL season opener for this moron to say the same stuff over not only will they get inundated by angry viewers, the network will lose a fortune in advertising.  And B Hussein Obama don't bring any dollars in.

Or if they say "Well BO we have a contract with the NFL but we'll put you on MSNBC..."they will really piss off someone they support...and supports them.

Something to think about

I'll watch the debate. Can see a replay of Obummer on CSPAN later.

Wait a minute - news flash - I'll watch the game - can watch a replay of Obummer on CSPAN later. Go Saints!

A most enjoyable and scathing post, Pat, but "scathing" is never enough for this brat in the White House.

Obama '12 is starting to remind me of Newt Gingrich '12. Talks a good game, wowed people a long time ago, but when you really start looking at what he's doing, it's full of gaffes and disasters.

I don't need to hear his speech. I've heard 100 variations of it. He says the same damn thing every time he talks.

Like Tony said, control what you watch, I control what I read, and when I seen a drivel writer like Tony, who blurts his opinions without explanations has written on this site, I jump over his entry and continue reading worthwhile contributions. Besides, it prevents brain damage.