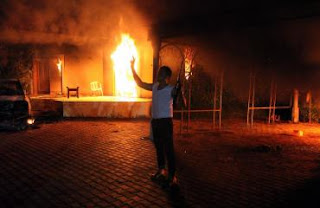 It seems as if everyone is talking about Benghazi.

Yesterday afternoon I was sitting at the kitchen table writing checks and paying bills when my brother breezed through the front door ranting and raving about Obama's seeming dereliction of duty in Benghazi.  He's not one to usually pay attention to such things.

The Benghazi story doesn't feel like Fast and Furious did; I kept thinking Fast and Furious was going to get more traction than it did.  I mean, a murdered border agent, our government walking guns into Mexico, hundreds of dead Mexicans, drug lords, the who mess.  Well, there was a little investigation, a deeply researched book, a fair amount of outrage, but it never caught on with the general public or the "low information voter" like it seems Benghazi has.

One of the most succinct summations of this mess came from Mark Steyn's weekend column:

We also learned that, in those first moments of the attack, a request for military back-up was made by U.S. staff on the ground but was denied by Washington. It had planes and special forces less than 500 miles away in southern Italy — or about the same distance as Washington to Boston. They could have been there in less than two hours. Yet the commander-in-chief declined to give the order. So Glen Doherty and Tyrone Woods fought all night against overwhelming odds, and died on a rooftop in a benighted jihadist hellhole while Obama retired early to rest up before his big Vegas campaign stop. “Within minutes of the first bullet being fired the White House knew these heroes would be slaughtered if immediate air support was denied,” said Ty Woods’s father, Charles. “In less than an hour, the perimeters could have been secured and American lives could have been saved. After seven hours fighting numerically superior forces, my son’s life was sacrificed because of the White House’s decision.”


The pain of this father is unbearable.  His son signed up to serve his country, not to be abandoned by it.

Smitty, over at The Other McCain, makes a valid point, too:

This notion of “never leaving a buddy” is pounded into every military head at every rank. Should you hold the privilege of commanding a unit, I perceive it counts double: you neither want to see a buddy left dangling in the breeze, and you really don’t want the anguish of explaining to the world why there was a death within you command.
Which brings us to our current Commander-in-Chief, #OccupyResoluteDesk. I don’t believe the principle of “never leaving a buddy” eluded George W. Bush, say whatever else you will of his policies. In contrast, you have the Obama White House needing to dispute a storythat it sends form letters to families of the fallen. Wow.

This is clearly a concept Obama can't relate to; he's more accustomed to throwing people under the bus.

Then there are those who believe that the whole Benghazi fiasco was a conspiracy theory: that Obama planned for Stevens et al, to be taken hostage whereby he would negotiate some terrific hostage deal (right about the time of the foreign policy debate), the hostages would be freed, and he would waltz into re-election in November.  That might explain the lowered security, but is there enough evidence to support this theory?  I don't know.

Senator John McCain says that it's either incompetence or a cover-up, both unacceptable:

"This is either a massive cover-up or an incompetence that is not acceptable service to the American people," he said on CBS's "Face the Nation."

McCain said that information that has surfaced since the attacks, which claimed the lives of four Americans, including U.S. Ambassador Chris Stevens, indicates the narrative provided by the White House in the days following was "patently false."

Either way, whatever it is, the responsibility of four dead Americans is Obama's.  The administration clearly does not want this uncovered before the election which is also an indication of culpability.

And what of Hillary Clinton's role?  Did she, in fact, try to get extra security for Stevens and his team?

Even so.  The buck stops with Obama.

It is a shameful mess.  And one that Obama will eventually have to answer for.

(See Doug Ross for some unraveling of this mess.)
Posted by Pat Austin Becker at 8:10 PM

I think O summed up his whole philosophy in a recent statement when he said people should vote to get revenge. This is who the guy is. For some reason he does not get the concept of being commander in chief or the head of a large country. He is fighting a petty concern of revenge. For what?

Lets just hope that at least 51% of the American people are not as stupid as we think they are.