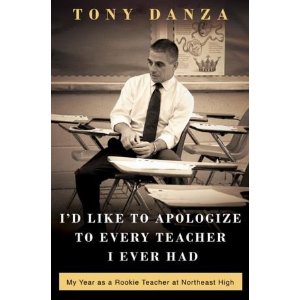 I've just finished reading Tony Danza's homage to teaching: I'd Like to Apologize to Every Teacher I Ever Had.

As a veteran educator of seventeen years I approached the book with some trepidation.  "Oh no, another 'super teacher' book where someone comes in and saves education in one miraculous year."  However, after reading the article by Mr. Danza that was circulating the newspapers and email circuit recently, and having agreed with it, I decided to give the book a shot.  I'm glad I did.

I enjoyed the book even though there are a few problems.  For example, he taught one 90 minute class a day for a reality show on A&E.  His 27 students were handpicked for the experiment, however, they presented a fair share of challenges.  He had a professional teacher in the room with him every day to review and advise his daily efforts.  The network shopped this idea around the country before being invited to Northeast High School in Philadelphia - a very large, urban high school.

One of the challenges Mr. Danza faced was his very real desire to teach these kids and to make a difference even while cameras and microphones were all over his classroom.  He was also faced with a fair number of skeptics at Northeast, veteran teachers who wondered if their kids would be exploited and if Mr. Danza could really teach.

Of course, perks of the network enabled him to buy a class set of Twilight for his students and various prizes for contests (like a flip cam), as well as the opportunity to take the class on two pretty nice field trips - one to Washington D.C., and one to New York. 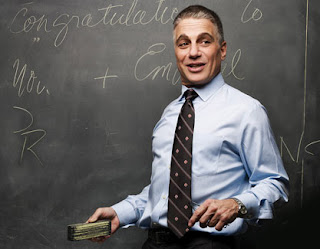 All that skepticism aside, the book is an enjoyable read.  As a teacher I applaud his efforts to engage the students and make them take responsibility for their own learning.  Despite the TV cameras, I'd say Mr. Danza had a pretty realistic taste of what it means to teach kids today.  He became immersed in their lives, problems, and crises.  He reached out to parents, he helped coach the football team, he wrote lesson plans, graded papers, wrote challenging tests, and in the end I think he made a difference in those 27 lives.

What Mr. Danza got out of all this was a whole new appreciation for what teachers do every day.  He writes:

"If I learned anything during my year at Northeast, it's that the blame game serves no purpose in our education system.  Sure, there are some bad teachers, and some bad administrators, just as there are failing corporate CEOs and lousy actors, but the vast majority of educators I met at Northeast were not bad so much as they were discouraged and overwhelmed.  The rising numbers of low-income and immigrant children, the underwhelming involvement of parents, and the impact of a culture that sneers at knowledge instead of treasuring it all make the classroom a very tough place to work.  Beyond that, the sheer logistics of teaching, counseling, comforting, coaching,and inspiring 150 students each and every day are beyond the capability of most normal human beings.  Yet public school teachers are expected to perform these tasks calmly and brilliantly while simultaneously documenting and evaluating every move they and their students make.  Oh, and don't forget staying up-to-the-minute and responsive to those constantly changing district mandates and national policy shifts.


I'd say that about sums it up.

Mr. Danza's parting words, and the article mentioned above, implore parents to become involved in their child's education and he implores students to take part in their own education rather than walking into a room and waiting to be entertained by the teacher.  Learning can be fun, he insists, but take responsibility.

Many of the new governmental mandates put all the blame and onus on the teacher and administrator.  No new directives are placed on the kids or parents.  Mr. Danza's book calls attention to that problem.


NCTAF’s findings are a clear indication that America’s teacher dropout problem is spiraling out of control.  Teacher attrition has grown by 50 percent over the past fifteen years.  The national teacher turnover rate has risen to 16.8 percent.  In urban schools it is over 20 percent, and, in some schools and districts, the teacher dropout rate is actually higher than the student dropout rate.


Hopefully Mr. Danza's book will gain some traction and be read not just by teachers, but by parents, too.  Parents, above all, need to know what's going on at school and be involved.

You can watch three episodes of Teach on the A&E website, here.

Read the book - either hardcover or Kindle!