Local Veterans Day Events to Add to Your Calendar 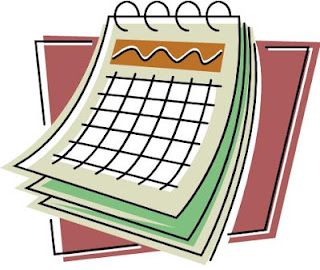 Time to update your calendar with some important local events for Veterans Day.

On Wednesday, November 7 there will be a Veterans Day celebration at the Northwest Louisiana Veterans home on Arthur Ray Teague Parkway, at the foot of the Shreveport-Barksdale Bridge.  It begins at 9:30 a.m.  The Parkway High School band will perform and the ROTC will be in attendance.  All veterans are invited.

On Saturday, November 10 there will be a Vets for Vets Biker Rally at the old Hamel's Park (now RiverPark Church), on E. 70th Street.  The event kicks off at 9 and runs until 4.  Admission to the park is free.  There will be food, drinks (no alcohol), live music and other events.  Here's their website and flyer: 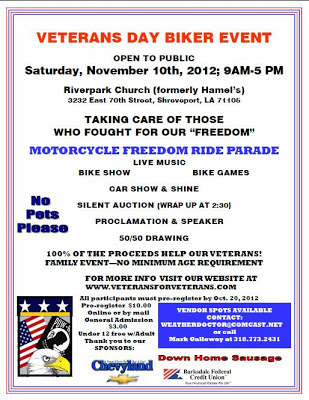 I know that the fabulous Soulfish Blues Band will be performing in the afternoon.  It should be a great event.  We will definitely be there.

Sunday November 11 at Municipal Auditorium is the Louisiana Military Hall of Heroes Induction Ceremony at 12:30.  It should run about an hour:

The American Legion’s Post 14 Commander, Stephen J. Lavery, will speak on the history of the Municipal Auditorium and the role that the American Legion played in leading the fundraising drive to build the building. All legionnaires are encouraged to attend this ceremony. Cleauthor Sanders, a USMC veteran who fought in World War II, will be inducted into the Louisiana Military Hall of Heroes.


Sunday, November 11 at 2 is the Louisiana Veterans Honor Parade.  This is the closing day of the Louisiana State Fair; floats, bands, ROTC groups, and veterans organizations will parade down the midway beginning at Fair Grounds Field and ending at Hirsch Memorial Coliseum.  Free admission and free parking for all veterans and their families.  Veterans in attendance will have the option to ride a shuttle bus in the parade.

Following the parade will be the Louisiana Veterans Honor Ceremony at Hirsch Coliseum.

Veterans from all wars will be recognized during the Louisiana Veterans Honor Ceremony at Hirsch Memorial Coliseum. The Shreveport Metropolitan Concert Band and Airline High School Choir will perform special music. Judge Henry Brown is the featured speaker. Informational booths on veterans services will be available, and awards will be presented to local veterans for special service.


And finally, on Monday, November 12, at Parkway High School, there will be a Military Tattoo Ceremony.

Ronald M. Chatelain, Louisiana's most decorated soldier, will be the honored guest at Parkway High School's JROTC Military Tattoo Ceremony. Chatelain is the recipient of the Distinguished Cross, Silver Star, Bronze Star and five Purple Hearts -- all awards given for bravery in combat. A retired Army General will be there to present Mr. Chatelain's Distinguished Cross. The public is invited to attend this momentous occasion and also observe the Tattoo Ceremony, a military tradition that dates back more than 300 years. This year's program will feature a Saber Team, Drum Corps, Drill Team, dance line performance, choral selection, service medley, a flag folding ceremony including TAPS, an enlistment ceremony of high school students and more. A short social will follow the ceremony.


You can read more about traditional tattoo ceremonies here.

Many schools in the area will be honoring veterans on Veterans Day as well.
Posted by Pat Austin Becker at 12:24 PM