Report from the 2012 Freedom Rally in Bossier City 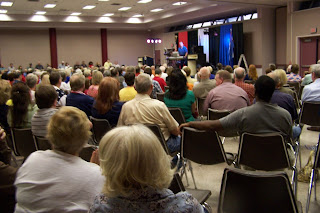 The takeaway message from tonight's Freedom Rally at the Bossier Civic Center was all about restoring freedom and prosperity in America.

The event kicked off about 5:30 inside the Bossier Civic Center and the crowd quickly filled two huge meeting rooms.  As host Royal Alexander began his opening remarks, event staff was busy bringing in more chairs to accommodate the crowd which was spilling out into the hallway.

Mr. Alexander quoted Thomas Jefferson in his opening remarks, reminding us all that "A government big enough to give you everything you want is big enough to take away everything that you have."

I was sitting next to Sharon McCullar who is a veteran, a small business owner, and a mother of two Marines; she was one of tonight's speakers.  She estimated the average age of the crowd at about 60, but I think it dropped a bit lower as people filtered in from work.  Steve estimated the crowd to be about 300 but I had it a little higher.  The enthusiasm was infectious.

One of the first speakers was U.S. Senator David Vitter who spoke about the need for a pro-growth tax rate in America to encourage business development.  He stressed the need for Republicans to take back not just the White House but also the Senate so that we can put in targeted health care reform and repeal ObamaCare.  This was met with thunderous applause. 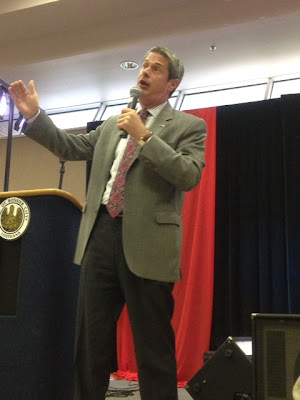 Addressing national security and military budget cuts, Senator Vitter called for an end to "the apology tours" and quoted Reagan who said, "Of the four wars in my lifetime, none came about because America was too strong."  Senator Vitter says that "peace through strength" is the only way.

Another popular theme, especially here in oil rich, and Haynesville Shale country, Louisiana was Vitter's derision of "speculative green energy companies," many of which go down the tubes; we need to develop our energy resources here at home.

Senator Vitter closed his remarks by stressing that this election is "razor thin."  He said, "I DO believe the polls," rather than the conspiracy theorists who suggest that the polls are misrepresenting the actual numbers.  "Every vote counts," he said, reminding everyone of Florida.

Sharon McCullar has been a popular speaker at these events and she was warmly received.  She spoke of the socialist, entitlement mindset of this administration and encouraged everyone to engage their children in this debate because it is, after all, their future.  McCullar said we are "on the verge of a nuclear holocaust between Israel and Iran...our world in possession of 20,000 nuclear weapons!  We hope and pray humanity will have the restraint not to detonate."

She spoke of the huge debt, the Arab Spring, the Muslim Brotherhood, and of course, Benghazi.  McCullar says "these days, we are living in?  These are the days God ordered for us," because "he knew we would be willing to stand with courage."

She said that God "is not neutral in the affairs of humankind."

McCullar's remarks were filled with humor and optimism as she reached out to everyone there and of every religious persuasion, to believe and to pray for the future of our country.

Here's a segment of her speech on Benghazi and Obama's national security policy which she says, "he's gonna get us all killed!"  And, I apologize for the angle.  Sharon isn't very tall so mostly what you see is the podium.  It's the words, really, that you need to hear.  And the thumbnail is sideways but it doesn't play sideways.  Anyway, just watch it.

One of the highlights of the night was Karen Watson, author of Being Black and Republican in the Age of Obama which you can order here. What a spitfire she is!

When she finished speaking there was a dash to the back of the room to pick up her booklet.  (I got one.)

Royal Alexander said, "She tells it like it is!"  and he's right.

In addition to the rousing speakers, there was also great musical entertainment.  Johnny Rowland entertained the crowd between speakers and at one point did a take-off on "Midnight Special" which got these two patriots up on their feet.  It's a blurry picture because they were dancing up a storm in the aisle: 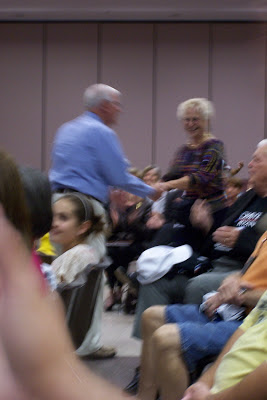 They were having a great time!

The evening closed with "God Bless America" and a promise of a brighter future for America.

Now is the time.

This was my first tea party rally. Enjoyed it.

I could not attend this rally , so I thank. you for posting these speeches