"My Number One Priority is to Always Keep our Diplomats Safe..." 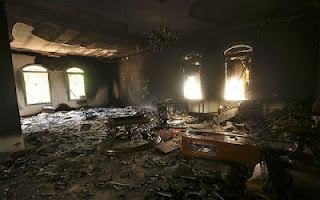 The fact that Obama went to Vegas the night news was breaking in America about the murder of American ambassador to Libya Chris Stevens is insane.

Even crazier than that?  Everyone involved knew that Benghazi (and Stevens) was a target and nobody did anything about it.  Oh wait, actually, what they did was stand down:

The former head of a Special Forces "Site Security Team" in Libya tells CBS News that in spite of multiple pleas from himself and other U.S. security officials on the ground for "more, not less" security personnel, the State Department removed as many as 34 people from the country in the six months before the terrorist attack in Benghazi that killed Ambassador Chris Stevens and three others.


For some strange reason, despite the obvious jihadist presence in eastern Libya and multiple warnings from different sources that they needed better protection, State seems to have resisted calls for a more robust security presence at every turn.


The State Department basically says nothing was amiss, that no extra support was requested, and that there was no net loss of personnel after the initial team left in August.

It's incredible to me that no one has been fired over this; Americans, including the US ambassador, were killed. Why the decreased security? Someone has to answer that. Was it just bureaucratic stupidity and negligence, or part of the administration's effort to minimize the threat of terrorism?

Do we even need to ask what the media would be saying had this happened under George W. Bush's administration?

At least this debacle is distracting us from talking about the last debacle.  The just keep coming.

Let's put it in pictures:

The blog "Democratic Underground," a site which I urge you to avoid like the plague, has been carrying a post which condemns Romney because his proposed budget (!?) would reduce funding for security at embassies. The reaction when I pointed out that Obama had not merely proposed, but had actually done that very thing and mentioned Benghazi was nothing short of explosive.