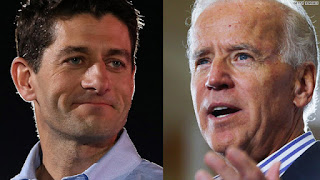 The VP debate begins in a couple of hours.

While we're waiting, anyone want to explain to me HOW Team Obama can blame the events in Benghazi on Romney/Ryan?


"...a cornered flack falls back on her most basic impulse in a desperate situation: She blames the other party for making a big deal out of nothing. And by “nothing,” I mean the murder of the U.S. ambassador and three American consulate personnel."


Go here for the video.

You think Libya will come up tonight?

Are we not allowed to ask questions about national security anymore?

Added:  Krauthammer:  "Nobody died in Watergate."

Wall Street Journal calls the debate for Biden and we're still thirty minutes from the start.

Ace is lowering expectations; it's a good point.  Getting cocky is always bad.

7:45:  I'm watching pre-game on CSPAN.  Frank Fahrenkoph is asking people in the audience not to Tweet for 90 minutes.  Fat chance. 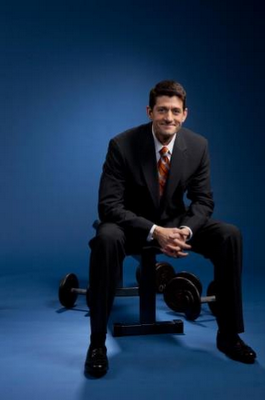 8:05:   Libya right out of the gate - AND Raddatz calls it a pre-planned assault and a terrorist attack.  Biden vows to "get to the bottom of it" yet pivots to Afghanistan.  She asked about Libya.  First Osama bin Laden reference.  Let's count them!

8:10:  Ryan's first response to the question hammers on the YouTube video blame game.   "Now they're trying to blame the Romney/Ryan ticket for making this an issue!"  He's incredulous.  Biden is squinting.

Good one:  Ryan points out that we should have spoken out sooner on the Iran Green Revolution as he defends Romney's speaking out on Libya.

Biden says "These guys bet against America all the time!"  WTH is he talking about?

He falls back to the "bad intelligence" excuse.

8:15:   Ryan is steady, in command of his facts and Biden is over there laughing at Ryan and smirking.  That ought to backfire on Biden.

8:20: "Bibi's been my friend for 39 years!" says Biden.  Condescending.  Biden swears Obama/Biden "will not allow" Iran to get a nuclear weapon; "Iran is more isolated today than they were when we took office!"  Talk about malarkey!

Switching to the economy now.

8:25:   Biden opens the economy segment by talking about the mess Bush left.  And there's the 47% comment.  Ryan ought to be on solid ground on this topic.

As Ryan points out the high unemployment rate Biden outright laughs at him.

Biden says Republicans just need "to get out of the way."  Ryan rebounds with the reminder that they came in with one party control and passed a stimulus.

Ryan:  "Was it a good idea to borrow all this money from China?"

Ryan:  "Where are the five million green jobs?"

Moving on to Medicare.

8:40:   Ryan:  Obamacare takes $716 billion from Medicare to pay for Obamacare.  Obamacare's board will lead to denied care for current seniors.  Biden:  "Gawd I heard that death panel debate from Sarah Palin."

Biden talks right to the camera now, to seniors:  Do you have more benefits today than you used to?

As Ryan tries to make his case Biden interrupts him then laughs at him.  Ryan needs to get aggressive here.

8:45:   Why does Raddatz keep letting Biden interrupt Ryan and step on his time?  (Rhetorical question).

Biden's strategy seems to be interrupt everything Ryan says so that Ryan can't make a point and Raddatz lets him.  Again, Ryan needs to be more aggressive.

Moving on to taxes.  Biden gets his two minute opening.  Note:  Ryan does not interrupt.

Ryan's turn:  thirty seconds in, Biden shaking his head and smirking.  Ryan is in command of his facts and statistics as he points out the faults of taxing small businesses.  Ryan takes his turn to look into the camera:  "Look out middle class!  The tax bill is coming to YOU!"

Ryan does, however, get through his two minutes without an interruption this time.  Lots of smirking and outright laughing by Biden though.  Obnoxious.

8:50:   Raddatz is doing nothing to reign Biden in and Biden is making an ass out of himself.  As Ryan touts bipartisanship and Jack Kennedy, Biden says, "Oh NOW you're Jack Kennedy!?"

Between Raddatz and Biden, Ryan has a hard time completing a thought; that said, he's doing well just staying on his feet.

Pivoting to defense now.  Raddatz and Biden are now double teaming Ryan.  Ryan points out that a small defense invites weakness.  Biden denies cuts to defense and asserts that sequestration is what the Republicans wanted.  Ryan is getting his sea legs and getting a little more aggressive.

Raddatz cuts Ryan off yet again to move on to Afghanistan.

In case al Qaeda didn't know when we were pulling out of Afghanistan?  2014.  Says Joe.

Thanks Paul Ryan:  We don't want to put our draw down date on our enemies calendar.

Raddatz:  Do you think the Taliban is taking advantage of this timeline?  Duh!!!

Now Raddatz is schooling Biden on how the military follows orders.  Is Ryan still here?

9:05:   Ryan makes the case that our soldiers in Afghanistan are less safe because they're doing the same mission with less people; Biden says that the Afghans should step up.  Now we're arguing about fighting seasons.  "The calendar works the same every year," says Ryan.

9:10:   Bless his heart, Paul Ryan is trying to stay steady on on track but Biden misrepresents everything and interrupts constantly.  I think Ryan isn't aggressive enough or a big enough blow hard to keep up with Joe.  Plus, in general, Americans are tired of our presence in Afghanistan, I think, so Biden is probably winning on this one.  I think Ryan is winning on argument but Biden's personality is overshadowing the facts.

9:15:  Abortion.  And Raddatz notes they are both Catholic.  "Please talk personally about this, if you could," she says.

Ryan is pro-life but not just because of his Catholic faith.  Because of reason and science, too, he says.  "I believe life begins at conception."  Ryan tells a personal story about his first child's ultrasound where she looked like a "bean."  And then saw the heartbeat.

You can hear Biden laughing in the background.

Ryan:  Now the Democratic party supports abortion without restriction and WITH taxpayer funding.

Biden's turn:  "My religion defines who I am."  Biden says he accepts that life begins at conception but refuses to impose his faith on other people.

Ryan says the Romney administration will oppose abortion "with exceptions."

9:25:  Biden reminds us that the next president will get one or two Supreme Court nominations.  Thanks for that reminder.

Raddatz is closing with a question about the negativity and tone of the campaign.  Biden is wandering in the weeds somewhere about Romney/Ryan stepping on the middle class.  Romney has made "slipshod comments" Biden says.  He would know one.

Ryan:  Obama ran on Hope and Change and is now running on blame and defame.  Points to all the broken promises (health care:  You can keep your insurance!)  Ryan points to 21 tax increases in Obamacare, 12 of which hit the middle class.  No credible budget from Obama in four years.  We speeches from this administration, not leadership.

Biden interrupts, of course, and asks for equal time even though his time came first.

And Raddatz gives it to him.  I'd be interested to see the talk time numbers on this one.

Raddatz attempts to cut Ryan off as he tries to defend himself.  Of course.

Closing:  Ryan point to their five point plan, proven pro growth policies, etc.  Biden gets testy with Raddatz as she tells him he has fifteen seconds.  "He gets 40 and I get 15."  Cry baby.

Hmm.  Who won?  I think Ryan held his own and Biden made points, too.  I'd actually call it a draw.  Not the steamrolling that conservatives anticipated at any rate.

Biden was obnoxious and if anything, that could play against him, but I think people just expect that from him by now.  I don't think this debate will change the current Romney momentum.

We get to do this again in less than a week with the next presidential debate coming on Tuesday.
Job creator.

If Ryan doesn't completely steamroll over Biden I will be shocked. Really looking forward to this debate.

Libya? Oh hell yeah, according to Stephanie Cutter it is. I bet that woman hoarding 30 Obamaphones is Bush's fault, too.

8:09 and Joe is already rambling man and didn't the "intelligence community" tell Bush about WMD's and that was totally unacceptable, but it's a good excuse for Obama.

Liked the way that Ryan kept his cool while Biden grew more rude and disrespectful. I think next week Obama may try the same tactic (come off much more aggressive) and I hope Romney will be prepared to "swat him down".

Powerful new Pro Life ad is out "Who is the abortion extremist"?