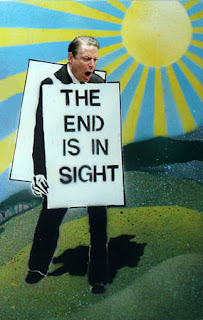 Good grief and I thought the suggestion of Janet Napolitano to replace Souter was enough to make me spew Cheerios all over the computer this morning, but this is too much. From the Catholic weekly America:

"... there is one person who selection transcends all the different classifications and whose selection would – instantly – galvanize the entire Democratic Party because it would entail the righting of an injustice that was simultaneously specific and so egregious as to appear cosmic. President Obama should nominate Al Gore to the Court. The choice would be electrifying.

"Some will object that Mr. Gore is not even a lawyer, which is true. But, there is a long tradition of having those with legislative or executive experience on the Court, a tradition that has fallen by the wayside as Presidents have sought nominees with little or no paper trail. Earl Warren was a lawyer, and had served as attorney general of California, but it was his stature as a three-term Governor who was nominated by both parties for the job that earned him the nod for the Court in 1953.

"Mr. Gore spent sixteen years in Congress making laws, serving in both the House and Senate. He served eight years in the executive branch enforcing laws. All this without a law degree."

Imagine! It's incredible what you can accomplish without a law degree!

Update: Smitty suggests we put Robert Stacy McCain up for Supreme Court as he also has no law degree, but Stacy, so far as I know, isn't a woman (have you SEEN the Speedo picture?). In order to meet what pundits believe is the "woman requirement" and a candidate who also has no law degree could be Little Miss Attila. I suspect her legal opinions would be fascinating and I'm pretty sure where she stands on the Second Amendment.

This makes me sick to my stomach! Can not tolerate Al Gore!

Gore in a court is like Manson on the red carpet.

Since I can't figure out that "links to this post" thing, I use Linkage!