Obama? Mary Landrieu Would Like a Word With You About the Budget... 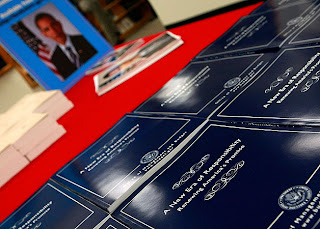 Louisiana Senator Mary Landrieu (D.) finds some things in Obama's budget that she doesn't like. Landrieu never endorsed Obama during the presidential primary but she did vote along with him 81% of the time while he was in the Senate (which wasn't actually a very long period of time).

One of her concerns is Obama's tax increases for domestic oil producers:

"Such tax hikes would increase our nation’s dependence on foreign oil, reduce the competitiveness of U.S. energy companies and negatively impact thousands of Louisianians who work in the industry," she said. "It is precisely when oil prices are low that we must most vigilantly work to increase domestic energy production to prevent another price spike when the economy recovers. The course of action proposed in the president’s budget would compromise America’s energy security, weaken our economy and reduce the supply of natural gas, which could undermine our efforts to clean our air and reduce carbon emissions."

She's also unhappy that he has not fully funded the 11th LPD-17 ship that was to be built in Avondale:

"While the 10th ship is funded in the budget, delaying the 11th ship greatly increases the likelihood that it will never be built," Landrieu said. "This is unwise from the standpoint of our economy and our military preparedness, and I will fight it at every step in the process. While I support trimming excess spending from the federal budget, we cannot shortchange national defense programs that protect our troops in a time of war and sustain American manufacturing jobs, particularly those at Avondale.”

The energy provision is troubling on several fronts but what concerns me most is that the Obama seems determined to focus soley on alternative energies while needlessly restricting domestic energy production. He's restricted offshore drilling; refused to open new areas for exploration such as ANWAR and also shut down any hope of developing nuclear energy with his decision to cut development of the Yucca Mountain site.

He wants to decrease dependence on foreign oil yet is giving us no viable options to do so.

The delay of funding of the LPB-17 until 2011, some say, ensures that the ship will never be built. At the very least it reflects Obama's overall attack on the defense budget. The defense cuts have been tragic and I'm afraid we'll be paying for those later.

We're involved in two wars. North Korea is launching missiles. Iran is developing a nuclear program. The Taliban is resurging. Pakistan is falling. We're about to release Gitmo terrorists into the U.S. We're alienating Israel and Britain. China is harassing U.S. Navy ships.

And his answer is to cut defense spending? Why? Beause we're going to make nice with the world and they'll love us.

While I've never been a fan of "Katrina Mary" Landrieu, I do agree with her on these two budget issues. But what I hope she sees is that they, along with the other budget items, indicate a dangerous pattern for the U.S. I also hope that her disaccord with Obama is reflective of an awakening awareness that his policies are dangerous.
Posted by Pat Austin Becker at 8:33 PM

Landrieu's discontent illustrates Obama's fiscal naivety and governmental inexperience. Obama thinks that he can arbitrarily cut and reduce what he feels is unnecessary and expect no complaints from others. After all he won and he has a mandate from the people and the people voted for change and blah... blah... blah...

Meanwhile he's spending like there's no tomorrow-- something most in Congress are more than willing to do-- but his unrealistic expectations of cutting back "outdated" and "failed" programs and projects as a fiancial offset is meeting with great resistance from a Democratic Congress.

Obama's putting us even deeper into debt then even he knows. And for no purpose.

Mean while back at the ranch... China has geological survey ships off the U.S. Gulf Coast looking for oil. What are we doing? We're talking about alternative sources that may exisit, or if it does it's so far from capabilities to adequately supply energy.
But in Obama's messianic mind, all he has to do is say what he wants, and it happens. If he want's peace, if he wants energy, all he has to do is say it.

I can assure you I will not be one who will be a practicing Orthodox Obamist.