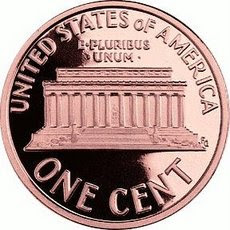 Robert Stacy McCain has a new blog. He still has his old blog, of course, but he's on a new mission now. He's multi-tasking!

Check out Not One Red Cent.

"Republicans across the country were outraged by this action, which is only the latest betrayal of grassroots conservatives by the out-of-touch GOP elite in Washington.

"The word went forth among conservative activists: Do not give money to the NRSC. The current chairman, Sen. John Cornyn, must resign. His replacement must pledge to keep the committee neutral in contested primaries. Let Republican voters -- not party elites -- choose Republican candidates.

"This is where the conservative grassroots rebellion begins. When the NRSC asks you for money, tell 'em: Not One Red Cent!"

He's right. There's little doubt that the party elites are primarily responsible for the mess the Republican party is in now. True Republicans want to get back to our conservative Reagan values and far away from the centrist, RINO, Democrat-lite that many of the party leaders have become.

This is why you hear so many people say, "I'm not a Republican, I'm a Conservative!" Well, since there's no Conservative party on the ticket, we've got to return the Republican party to its values and Stacy is taking a step with his new blog.

And for that matter, Stacy McCain is doing the ideal thing - he's actually DOING something rather than complaining. He's trying to help the party by doing what he's good at - writing.

So check out the site!
Posted by Pat Austin Becker at 7:37 AM

I think people are overstating the mess that the Republicans are in. The Dems will become unstable internally (as they are already doing from the waterbaoarding/CIA briefings) and then the Republicans will have a "resurgence." This is pattern that has repeated itself numerous times in the last couple of decades. Remember when the Dems were running around saying that they had to get back to their "grass -roots" in '00 and '04?

It should be remembered that modern conservative roots aren't that old and an amalgam of various political theories. What should be stressed is the identification and emphasis of specific ideological values.