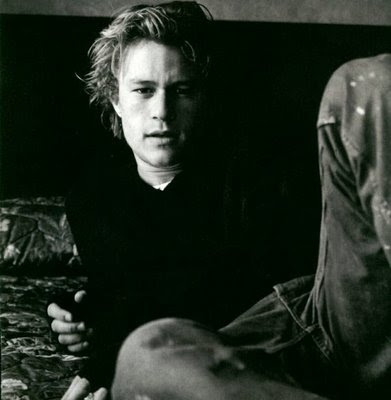 Your gratuitous Sunday Rule Five beefcake this week is Heath Ledger. What a cutie!

The news cycle this week was consumed with Nancy Pelosi stories and I just couldn't bring myself to write about her. I can't read about her anymore, either, so here are some Non-Pelosi links for you.

Babalu Blog has a couple of great posts on Marco Rubio here and here.

And speaking of Marco Rubio, Robert Stacy McCain has launched a new blog, Not One Red Cent! which highlights the folly of the NRSC endorsement of RINO Charlie Crist for the Florida Senate seat in 2010 over a true conservative such as Rubio. Yours truly is a contributing writer there, and I'm in the company of some really kickass bloggers, so check it out, and bookmark it!

Moe Lane has posted a handy-dandy checklist. Are you compliant?

Yukio, who ALWAYS has my back against the trolls, has a hilarious post on the importance of words.

Jimmie at The Sundries Shack weighs in on the heath care debate. It's going to get nasty folks, and you should be doing your homework. Professor Jacobson also has some insight on this issue.

At first I thought Lance at TrogoPundit had been overindulging in Cheerios, but then I understood.

Robert Stacy McCain is seeing the light with regard to Obama's "unsustainable" comments. Open your wallets.

Donald Douglas at American Power has a great post on saving the Ford Motor Company. And scroll down for some Rule 5 Jessica Simpson action. WHO says she's fat?!

Be sure to read Carol's post at No Sheeples Here on Islam Day; did you realize it's actually on 9/11?

Have you ever seen a Blobfish? He's kinda cute! :)

And speaking of critters, we're going to have to get PETA after Sandy. But Darrell and the raccoons are safe from PETA. Not sure about the dog though!

Still on the critter front, add Michilenes to your list - she's been trolling this blog for days, trying very hard to insult everyone who comments. Go check out her blog and her cats. She at least has cute cats.

And finally, don't forget to check out Immersion. Jessica has finally made it to South Korea!
Posted by Pat Austin Becker at 6:53 PM

I liked him in A Knight's Tale. Shame such a life ended so soon.

Speaking of trolls, I posted a bit if you're looking for a chuckle.
http://qwertyaltofuori.blogspot.com/2009/04/attention-grammarians.html

Trolling must not mean the same thing to you as it does for me.

Nevertheless, yes, I have some kittens that need good homes. The mom appeared in my driveway quite pregnant. I took her in and she had four kittens on April 1st.

The mother and all four kittens will need new homes as of May 27th. I any of your readers are local and know of someone who is looking to have a sweet kitten in their lives, or a grown cat that someone callously dumped, let me know.

Thanks for linking to the kittens. They need good homes. I already have more than the city allows. Any possible adopters are welcome.

I really tried to watch my typing this time.

@Michilines,
Good luck on the kittens. If I didn't have a dog, I probably would take a kitten. But then again I have a cat, that doesn't belong to me. I was adopted by the neighor's cat, and he lives in the bushes outside my front door, or it seem that he does.
When I leave the house, he comes out of the bushes, rubs up against my legs, and gets hair all over my pants.
It probably doesn't help that when he does this, I reach inside the front door, where I keep a little bag of cat food, just for him, and give him a treat.
What is so neat, there has been time, when I get home, I hear a loud "MEOW" and here he comes running across the yard.

@Steve
Familiar story -- it's how I got this pregnant mom. I have two feral cats that I have been feeding since before Katrina -- I remember because I thought they wouldn't make it throught Rita, but they did. They also made it through Ike.

Thanks for you wishes; if you know of anyone looking, then you know where to find me. They aren't quite ready but will be in a couple of weeks.

And cool for you for befriending a cat. :)