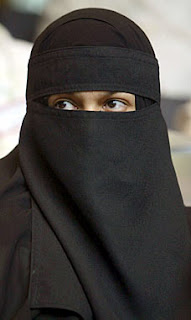 Obama's Cairo speech has been received with mixed results, but the overall consensus seems to be that it wasn't as bad as feared. It seemed to me to be adequate yet uninspiring and filled with platitudes. One thing that interested me was how he would deal with the issue of women's rights.

His main focus with regard to women seemed to be the right to wear the hijab. WTF? Here's the excerpt dealing with women's rights:

"The U.S. government has gone to court to protect the right of women and girls to wear the hijab, and to punish those who would deny it."

"I reject the view of some in the West that a woman who chooses to cover her hair is somehow less equal, but I do believe that a woman who is denied an education is denied equality. And it is no coincidence that countries where women are well-educated are far more likely to be prosperous."

"Now let me be clear: issues of women's equality are by no means simply an issue for Islam. In Turkey, Pakistan, Bangladesh and Indonesia, we have seen Muslim-majority countries elect a woman to lead. Meanwhile, the struggle for women's equality continues in many aspects of American life, and in countries around the world."

"Our daughters can contribute just as much to society as our sons, and our common prosperity will be advanced by allowing all humanity - men and women - to reach their full potential. I do not believe that women must make the same choices as men in order to be equal, and I respect those women who choose to live their lives in traditional roles. But it should be their choice. That is why the United States will partner with any Muslim-majority country to support expanded literacy for girls, and to help young women pursue employment through micro-financing that helps people live their dreams."

Compare this to the speech George W. Bush gave in Egypt in May 2008 (emphasis mine):

"Building powerful economies also requires expanding the role of women in society. This is a matter of morality and of basic math. No nation that cuts off half its population from opportunities will be as productive or prosperous as it could be. Women are a formidable force, as I have seen in my own family -- (laughter and applause) -- and my own administration. (Applause.) As the nations of the Middle East open up their laws and their societies to women, they are learning the same thing.

I applaud Egypt. Egypt is a model for the development of professional women. In Afghanistan, girls who were once denied even a basic education are now going to school, and a whole generation of Afghans will grow up with the intellectual tools to lead their nation toward prosperity. In Iraq and Kuwait, women are joining political parties and running campaigns and serving in public office. In some Gulf States, women entrepreneurs are making a living and a name for themselves in the business world.

Recently, I learned of a woman in Bahrain who owns her own shipping company. She started with a small office and two employees. When she first tried to register her business in her own name, she was turned down. She attended a business training class and was the only woman to participate. And when she applied for a customs license, officials expressed surprise because no woman had ever asked for one before.

And yet with hard work and determination, she turned her small company into a $2 million enterprise. And this year, Huda Janahi was named one of the 50 most powerful businesswomen in the Arab world. (Applause.) Huda is an inspiring example for the whole region. And America's message to other women in the Middle East is this: You have a great deal to contribute, you should have a strong voice in leading your countries, and my nation looks to the day when you have the rights and privileges you deserve.

The difference, it seems to me, is that Obama ignores the fact that women are routinely stoned, raped, abused and attacked in Muslim countries; instead he applauds their advances in women's rights. He criticizes the "view in the West" but offers no criticism of the Muslim view of the rights of women. Understandably, Obama doesn't want to offend his audience, but both East and West can see through this pablum.

George W. Bush, on the other hand, while also mindful of his audience, was a bit more forceful in suggesting that women have an equal place at the table and linking it to a morality issue.

"He tries to equate our culture with Islamic culture, reminding us that Western women are also struggling for equal rights. Because no matter what, Obama is compelled to point out that America is no better than any other country. In the case of women's rights this is not only absurd; it's reprehensible."

And Peter Daou offers this:

"With women being stoned, raped, abused, battered, mutilated, and slaughtered on a daily basis across the globe, violence that is so often perpetrated in the name of religion, the most our president can speak about is protecting their right to wear the hijab? I would have been much more heartened if the preponderance of the speech had been about how in the 21st century, we CANNOT tolerate the pervasive abuse of our mothers and sisters and daughters."

If you need a refresher on the abuses against women in Muslim countries, check out The Confluence.

In the end, it seems to me that Obama has no clue with regard to women's rights in Muslim countries; I'm sure he knows, but it's incomprehensible to me how he can not mention the abuses. The worst thing he can come up with is the hijab? What Bush did in his speech that Obama failed to do was to point out that there's a morality issue involved while pointing out that women have "rights and privileges" that presumably go beyond head coverings.

More speech reaction at Not Tucker Carlson, the best new news aggregator on the 'net!

Charles Krauthammer is one of my favorite commentators on Fox. He cuts through the idiocy to the heart of the matter. He is a brilliant man; and when he speaks,I listen.

So Obama's all for women's right to wear the hajib... what about a woman's right to not wear it?

My favorite Obama part: "I reject the view of some in the West that a woman who chooses to cover her hair is somehow less equal..."

Of course the intentions behind the covering of a woman's hair is by nature unequal. It is dependat on (and perpetuates) the idea of woman as temptress, reducing her to a potential (and inevitable) obstacle to male virtue ("objectification" anyone?). After all, men do not have keep themselves publicly plain and unattractive so that women will not be tempted.

Oh... but those are American ideas, how dare I bring such things up regarding our president?

Obama's Address in Cairo. Addressing the muslim world. It is indeed very interesting to hear what the President of United States have to say about muslims. This is truly a new page upon which history is being written. It is also of no doubt that Obama have successfully used the emotions.