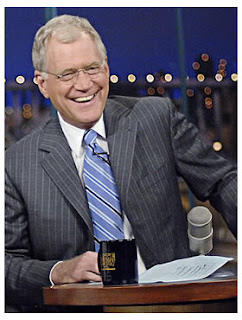 I've stayed out of the Letterman/Palin feud but Cynthia Yockey is not. In fact, she's madder than ever and I've got to admire her persistence.

Cynthia is running a campaign to boycott Letterman and has been going strong on it ever since he told the ill fated "joke."

One her blog, Cynthia wrote, "A commenter here pointed out that there are lots of other problems in the world that ought to have priority, so we should let go of getting Letterman fired. No, no, no — and Eric Hoffer, author of The True Believer, explains why: because 'fault-finding men of words' like Letterman are what bring down capitalistic and democratic societies where individuals are free and clear the way for totalitariam mass movements."

I've never been a Letterman fan and have often thought his humor was snarky and had a cruel edge to it. Oh, every once in a while he'd say something humorous, but as a rule, I never cared for him. I don't think you have to be mean to be funny. I saw a clip from The View where Joy Behar was actually on Palin's side but at the same time defended Letterman saying, "That's what comediens do, we tell jokes." True enough, but they don't HAVE to be mean.

Sarah wrote about this issue on her blog, also. She said, "If a man can't understand what is wrong with making very public jokes about raping a 14 year old girl (or any girl for that matter) and can't understand why that girl's parents are rightfully disgusted, then there is quite obviously something wrong with that man."

At any rate, Cynthia isn't accepting Dave's apology (either one of them) and points out that Republicans just give up too easily too often. Little Miss Attila has drawn her ire for putting down the fight as has Dan Collins at Protein Wisdom. (I don't think she's noticed yet that GatorDoug gave up, too.)

Robert Stacy McCain wrote about Cynthia's relentlessness, saying "You can't beat a man who refuses to admit defeat. You can kill a man like that, but you cannot defeat him otherwise, because he has gotten it in his mind to keep fighting, whatever happens." He goes on to compare her efforts to those virtues of the ancient Spartans!

Cynthia isn't giving up. And as RSM pointed out, she needs reinforcements. She's got all the information on the Boycott Letterman effort and the Get Letterman Fired effort.

Stop on over there and check things out!
Posted by Pat Austin Becker at 8:40 AM

Pat, I did not "give up". I think this is a gross waste of time frankly. I loathe when the Left tries to ruin people over "offending" someone. He made his asinine joke. He apologized, The Palin's accepted it. Move on.
The last thing we need is to act like the Left.

If we want to really try to force someone out of their job over an offensive remark, why not Murtha over his smearing our troops as cold-blooded killers? Now THAT is worth losing his job over.

I don't disagree with you at all, Doug. That's why I never picked up the banner on this one. My honest feeling was that there are other battles I'd rather fight. He's a comedian, it was a joke, and it was in poor taste. Like Behar said, who I hate to agree with, it's what comedians DO. Doesn't make it okay, it's just not a battle I want to fight.

The only point I was making in posting on it at all was to admire Cynthia's perseverance. It's a battle SHE wants to fight and so I say power to her!

I never picked up that banner either. I guess great minds do think alike huh?

I just never want to live in a country where being "offensive" ruins your life. The Left has tried to create that environment to intimidate the Right into silence.

I would rather win debates with ideals, rather than the tactics Cynthia seems infatuated with, those are going to hurt us ALL eventually.

By the way, love your blog, very nice work.

Check out this anti-letterman site: