John Boehner Says the Republicans Have a Better Plan 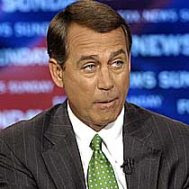 At this point in the debate I'm not sure either Democrats OR Republicans have the perfect answer to health care reform. What I DO know is that ObamaCare is not the answer.

Rep. John Boehner has a column this morning in the Pittsburgh Tribune-Review about the Republican's plan. He says that Republicans have a better plan. He suggests that basically we just need to improve what we have.

The Republican plan offers incentives for those that don't have coverage to get the "coverage they can afford." He doesn't specify exactly what those incentives are, but on Fox News this morning Lindsey Graham suggested lower rates for non-smokers, for example. Tax credits have been listed as possible incentives for those shopping for coverage; the problem with that as I see it is that not everyone pays taxes. That's a whole other problem.

Boehner suggests giving small businesses "better options to make health care coverage available for employees and their families." He says that small businesses could work together through associations to purchase this coverage.

He promises to "root out health care waste," but honestly, nobody "rooted out" much waste in the Stimulus plan so I don't have a lot of faith in this. Had anybody up there even READ the Stimulus plan, much waste could possibly have been avoided....but I digress.

Reform of medical liability rules, which Boehner promises, does sound like a good plan. While people should be protected and should have recourse for boneheads that screw up, frivolous suits only raise costs for everyone and benefit only trial lawyers.

Boehner did not mention Medicare reform in his piece which seems to be a ticking time bomb. It drastically needs reform and much could be saved there.

Highlights of the Republican plan, according to CNN, are:

The bottom line is that right now nobody has the right answers; all I know is that Republicans need to get out there with a viable, clear and effective plan, otherwise ObamaCare is about to be the law of the land and that won't be good for anyone.
Posted by Pat Austin Becker at 10:00 AM

No joke. I'm sweating this.