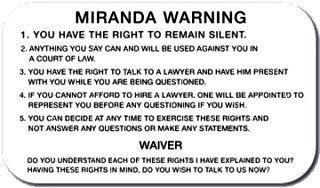 Via Drudge and The Weekly Standard, terrorists are now getting Miranda read to them:

But Republicans on Capitol Hill are not happy. “When they mirandize a suspect, the first thing they do is warn them that they have the 'right to remain silent,’” says Representative Pete Hoekstra, the ranking Republican on the House Intelligence Committee. “It would seem the last thing we want is Khalid Sheikh Mohammed or any other al-Qaeda terrorist to remain silent. Our focus should be on preventing the next attack, not giving radical jihadists a new tactic to resist interrogation--lawyering up.”

According to Mike Rogers, that is precisely what some human rights organizations are advising detainees to do. “The International Red Cross, when they go into these detention facilities, has now started telling people – ‘Take the option. You want a lawyer.’”

Rogers adds: “The problem is you take that guy at three in the morning off of a compound right outside of Kabul where he’s building bomb materials to kill US soldiers, and read him his rights by four, and the Red Cross is saying take the lawyer – you have now created quite a confusion amongst the FBI, the CIA and the United States military. And confusion is the last thing you want in a combat zone.”

One thing is clear, though. A detainee who is not talking cannot provide information about future attacks. Had Khalid Sheikh Mohammad had a lawyer, Tenet wrote, “I am confident that we would have obtained none of the information he had in his head about imminent threats against the American people.”

This is what happens when DOJ gets involved with what should be military jurisdiction. This is exactly the sort of thing that led us to previous terror attacks - when we start treating terrorists like your common street criminal we open ourselves up to events like 9/11.

And again, this is EXACTLY why Gitmo should remain open; sometimes in war you simply have to detain people. They don't all GET trials. It's ugly, but it's true.

And so now you have soldiers who will have to second guess their actions, and how they will be received on the front pages of the New York Times, before they act. Sometimes they don't have the luxury of those moments of deliberation. Sometimes the bad guys just have to be captured and detained so that they don't do harm to more people.

You have the right to remain silent and refuse to answer questions. Do you understand?

Anything you do say may be used against you in a court of law. Do you understand?

You have the right to consult an attorney before speaking to the police and to have an attorney present during questioning now or in the future. Do you understand?

If you cannot afford an attorney, one will be appointed for you before any questioning if you wish. Do you understand?

If you decide to answer questions now without an attorney present you will still have the right to stop answering at any time until you talk to an attorney. Do you understand?

Knowing and understanding your rights as I have explained them to you, are you willing to answer my questions without an attorney present?

Terrorists are jumping with glee all over the planet.
Posted by Pat Austin Becker at 1:23 PM

What the hell is the Red Cross doing in the middle of all this anyway? Terrorists have the "right"...? Don't make me laugh. I heart Gitmo!

You don't have to Mirandize the dead. Just say'n. Levin is all over this right now, btw.