Wright Reappears from Under Rock 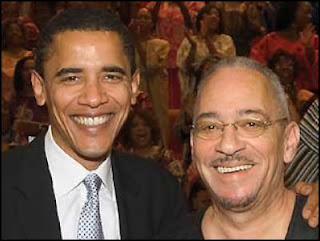 Jeremiah Wright has crawled out from under his rock:

Wright said that when he went to the polls, he did not hold any grudge against Obama.

"Of course I voted for him; he's my son. I'm proud of him," Wright said. "I've got five biological kids. They all make mistakes and bad choices. I haven't stopped loving any of them.

"He made mistakes. He made bad choices. I've got kids who listen to their friends. He listened to those around him. I did not disown him."

Asked if he had spoken to the President, Wright said: "Them Jews aren't going to let him talk to me. I told my baby daughter, that he'll talk to me in five years when he's a lame duck, or in eight years when he's out of office. ...

"They will not let him to talk to somebody who calls a spade what it is. ... I said from the beginning: He's a politician; I'm a pastor. He's got to do what politicians do."

Wright also said Obama should have sent a U.S. delegation to the World Conference on Racism held recently in Geneva, Switzerland, but that the president did not do so for fear of offending Jews and Israel.

"Ethnic cleansing is going on in Gaza. Ethnic cleansing of the Zionist is a sin and a crime against humanity, and they don't want Barack talking like that because that's anti-Israel," Wright said.

Allahpundit wonders to whom Wright might be referring - Emanuel? Axelrod?

Wright also pointed out that it's all been pretty good for him, this notoriety that is. The media "went back five, seven, 10 years and spent $4,000 buying 20 years worth of sermons to hear what I've been preaching for 20 years" and mind you, Obama, in all those years, never heard anything vile.

(More at Memeorandum)
Posted by Pat Austin Becker at 12:50 PM