What's in the Waxman-Markey Bill 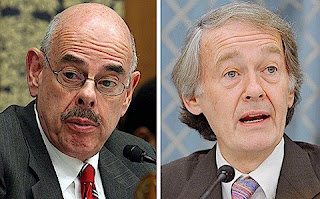 I was wide awake last night, unable to sleep, thinking about the Waxman-Markey bill, or the cap and trade bill, or H.R. 2454, whatever you want to call it. Most of us are calling it worse things than that.

This bill disgusts me on several levels. It's hard to know where to start. I suppose the fact that Congress voted for this thing without having read it should not surprise me as this is what happened with the Stimulus package. In fact, it's as if the authors were flaunting the fact that nobody was going to read it when they dumped the 300 page amendment on it at 3:00 a.m., just hours before the vote. It was never expected that anyone was going to read this bill. That's a travesty. John Boehner was right when he said that American deserve better representation than that.

The bill disgusts me in that it is based on a phony science. My purpose is not to debate whether or not global warming exists. The point is that there is, in fact, still debate about that, yet this bill assumes that it exists and then goes on to alter every aspect of our private lives based on that assumption. It strips us of our liberties. The fact that the EPA suppressed a 98 page report by EPA senior research analyst Alan Carlin, some assume under pressure by the Obama administration, that draws serious questions about climate change.

Carlin's report found "that global temperatures have declined for 11 years; that new research predicts Atlantic hurricanes will be unaffected; that there’s 'little evidence' that Greenland is shedding ice at expected levels; and that solar radiation has the largest single effect on the earth’s temperature." These findings are not what the administration wanted to get out right before the vote on climate change legislation.

The EPA justified suppressing this report by saying that Carlin is not a scientist. In her weekly column Michelle Malkin points out that "neither is Al Gore. Nor is environmental czar Carol Browner. Nor is cap-and-trade shepherd Nancy Pelosi." Carlin does, however, hold a B.S. in physics and has been with the EPA for 35 years.

At any rate, the report calling global warming into question was suppressed and the vote went on. The report was not read and neither was the bill.

The thing that disgusts me most about this bill is the fact that it knowing and intentionally creates an energy tax during a time when we are in a recession. People are already losing jobs, unemployment is up and is certain to get worse even without the passing of this bill. The only way this bill works is if it makes it painful on citizens to use energy, thereby forcing us to use less.

This bill will force jobs overseas. The Democratic administration will tell you that it's going to create all these wonderful "green jobs," windmill farms, solar panels and so on. Meanwhile, coal plants will be pushed out of business as will refineries and many small businesses. Many jobs will go overseas where these draconian strictures do not apply. This gives economic advantage to other countries. The Heritage Foundation predicts that this bill will "destroy 1,145,000 jobs on average, with peak years seeing unemployment rise by over 2,479,000 jobs."

And how will this bill affect you? It has regulations on every single aspect of your daily life. There are light bulb restrictions (no more than 60 watts in your candelabra); in fact there's a whole section that deals with lamps. If you decide to build a new home, it must meet new and specific energy requirements. If you decide to sell your existing home, a federal inspector must inspect your home, determine it's energy rating, and if your home is found to be unacceptable then you must retrofit and make changes before you will be able to sell.

There's an entire section on planting trees including guidelines on "scientific based measurements outlining the species and minimum distance required between trees planted...in addition to the minimum required distance to be maintained between such trees and building foundations, air conditioning units, driveways and walkways...". Do we really need the federal government telling us where we can plant trees?

There's a section dealing with outdoor lighting in which you are given instructions about landscape lights, lights in your swimming pool, lights on artwork and other architectural lighting. The federal government is going to tell you what wattage that light can be and how many you can have. In some cases the lights must be capable of producing two different light levels (100 and 60 watt).

There are new government regulations for water dispensers, hot tubs and other appliances. They're going to regulate water usage, and regulate wood stoves. Any wood stove that does not meet regulation must be "destroyed and recycled."

It goes on and on to enumerate where plugs for your hybrid cars must be, and deals extensively with transportation.

Do we really need the government dictating all this to us? Is this what we signed on for? If your Congressman had actually read this bill, would he have still voted for it? If the answer to any of those questions is yes, then we have even more serious problems than this bill.

There is still time to stop it. Contact your senators. Tell them how you feel about this legislation. Regardless of how you feel about global warming and whether or not it exists, (this bill does nothing toward elimination or cessation of that) we don't need a nanny state. If I want to use a 100 watt incandescent light bulb in my house, I don't want Big Brother coming after me for it. And I don't think I'm killing any polar bears by doing so.


Update: Don't miss this article which explains how lower income families will get cash by direct deposit to offset their energy costs.

Update 3: I want to clarify the statement on the housing energy standards. The government is not going to literally tell you that you can't sell your home unless it meets certain energy criteria but it does establish an energy performance labeling system that would rate your home's energy standards and this information would be available to any buyer. A full disclosure sort of thing. If your windows are leaky and your insulation poor, your appliances out of date, this would all affect your rating thus making it more difficult to sell your home. This is optional (at this time).

Here is a short article that clarifies this.

Update 4: Linked by Pundette in the Green Room at Hot Air. Thanks Pundette! And linked at Pundit & Pundette.

Pundette links to another close analysis of the bill that is well done at Stop the ACLU. Check it out.

Previously:
Fun Facts on Cap and Trade
Representative John Fleming's Statement on Cap and Trade
Team Obama and Congressman Cao
What Kind of Energy Czar Doesn't Read the Bill?
Posted by Pat Austin Becker at 9:07 AM

Regarding the required inspection before one may sell one's house, please specify the exact section of the bill that says this. I can't find it, and I am skeptical there is such a provision. Please prove me wrong.

A contact in the HR tells me there is NO explicit language to this effect, but something in the bill could be interpreted that way. That's already a different story.

So, Sheldon, your point is that it might not be totally and completely God awful bad?

Even if global warming were not crackpot science we don't really need this now since Obamanomics is drastically reducing energy usage enough.

@Sheldon,
I linked the area where the retrofit is covered. Specifically it is Sec. 204.h.3.

The assessed value of your home will figured based on your energy compliance and this information will be available on public records.

The retrofit program is discussed in Sec. 202.e.2, part of which says, "EMPLOYMENT- States and local government entities may administer a REEP program in a manner that authorizes public or regulated investor-owned utilities, building auditors and inspectors, contractors, nonprofit organizations, for-profit companies, and other entities to perform audits and retrofit services under this section. A State may provide incentives for retrofits without direct participation by the State or its agents, so long as the resulting savings are measured and verified. A State or local administrator of a REEP program shall seek to ensure that sufficient qualified entities are available to support retrofit activities so that building owners have a competitive choice among qualified auditors, raters, contractors, and providers of services related to retrofits. Nothing in this section is intended to preclude or preempt the right of a building owner to choose the specific providers of retrofit services to engage for a retrofit project in that owner’s building."

All of this, of course, can be changed or amended at any time and without notice by said Administrators, as they see fit.

You raised the question "What's in the Waxman-Markey Bill" but I think the real question, based on his picture, is what is Rep. Waxman?

Look at him... I think he's an alien-- and not a benevolent one either.

Nicely done! I have posted and linked you in numerous places.