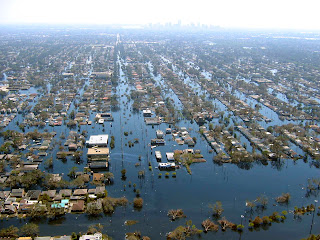 Today is the fourth anniversary of the second landfall of Hurricane Katrina; on this day four years ago is when she blew her way into New Orleans. Over 1800 people died. Even up here in North Louisiana, it was the most surreal thing. The cable news coverage started with Shepard Smith on the lobby of his French Quarter hotel in the wind and rain doing live broadcasts and ended with his meltdown on the bridge while talking to Bill O'Reilly. Evacuees streamed out of New Orleans, controversy erupted over multiple issues, state and local government collapsed, and it was all "George Bush's fault."

The New Orleans area will have many remembrances and events this weekend. Take t 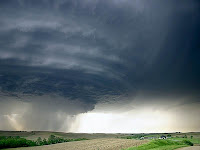 he time to remember the lives lost and the lessons learned. You can read about some of the events here and find one near you if you live in the area. NOLA has a round-up of national coverage on the Katrina anniversary here. St. Bernard Parish remembers here. And here is a great rebuilding story - a farmer who lost all his citrus trees because of the storm surge refused to give up.

So on to the linkage.

It's been all about Ted Kennedy this week and frankly, some pretty vile things have been said. Pundette takes a look at one of them in her takedown of Melissa Lafskey suggesting that Mary Jo Kopechne might feel "it was worth it." Disgusting.

Stacy McCain takes on Kennedy's sick sense of humor and penchant for Chappaquiddick jokes. Ann Althouse also covers this plus she has a beautiful photo today which sort of reminds me of Iowa but doesn't (too many trees). In fact, it really doesn't look like Iowa except for the hay bales. But I like it anyway.

No Sheeples Here! adds to the Kennedy mix.

Reaganite Republican Resistance rounds things up for us with regard to Kennedy's death.

Political Byline reminds us that Everything Is Made in China! Go look.

Did you see Rep. Diane Watson this week singing the praises of Castro? Carolyn did. She's got the video. What a nutcase; she says Castro is "one of the brightest leaders I've ever met." Lordy.

Little Miss Attila doesn't think giving Obama control of the internet is such a good thing...

Doug Ross takes a look at Obamanet as well.

Troglopundit is covering his Rule 5's with Liv Tyler; she's just adorable. Loved her in That Thing You Do! Plus, check out his "Current Favorite Picture" in the sidebar (hurry, before he changes it!). It's great!

Sister Toldjah points out the absurdity of White House spokesman Bill Burton's comment that nobody in the media "bemoaned" Bush's vacations, as Obama prepares to take a second vacation on Wednesday. Legal Insurrection weighs in as well.

Caught Him With a Corndog has no faith in Mary Landrieu (good call, Red!)

Left Coast Rebel takes a look at the provision in HR3200 which divulges your private tax information.

Jimmie at The Sundries Shack has concerns about Eric Holder. Amen to that, baby.

Wyblog did HIS blog round-up on Thursday thus upsetting the blogospheric pattern of Full Metal Jacket SATURDAY but it's all good because he does a great blog. And no, I will not save you any Octoberfest! I'm selfish! Mine!

God help me, Sippican Cottage has the most bizarre video I've ever seen. As the ultimate Eric Clapton fan, I thought I'd seen it all. I had not. Until now.

Oh, and one of my Creative Writing students this semester has started a blog. It's new. Check him out.

Okay, that's it for now. I'm doing some household things today; rearranging some furniture and such. Never-ending carpet cleaning. Laundry. Blech. Reward with Octoberfest at the end.
Posted by Pat Austin Becker at 8:15 AM

Everybody knows there's no pulling Smitty away from a buffet.

Tanks! My alt posting title was "Mary Mary,(Why You Buggin)" but I didn't want to mar the memories of a good Run DMC song. Vote her OUT! Vote her OUT! Recall! Recall!