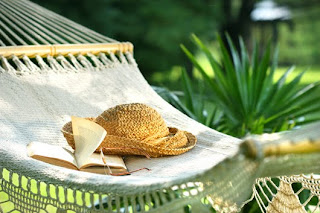 It's Saturday and since last week was the To-Do List edition, this Saturday is the Do Nothing edition. I'm aching for a lazy day. I'm reading a good book right now, (it's actually NOT about politics, for a change) and I just want to lay on the couch or sit on the deck and read all day. Watch the dogs be dogs. Eat something I didn't have to stay in the kitchen all day to prepare, like a sandwich.

And so, even though the grass needs to be mowed, and the carpets could do with a bit of touch up steam cleaning (still working on that house training thing with puppy, but we're making progress), I will choose to do nothing today. And I will choose not to feel guilty about it. A treat.

On to the linkage:

I'm starting this week with Doug Ross who takes note of the increased deficit figures from the Friday News Drop yesterday afternoon. Doug channels Mark Levin's Liberty and Tyranny (and good common sense) as he warns: "Tax cuts, however, are anathema to Democrat Statists who seek control of your private property. They who seek to control the size of your cars, how much energy you can consume, how much water your toilets can flush, what kind of light bulbs you can buy... anything and everything related to your privacy. Interestingly, it never ends with Democrats. They always want more control of you and your private property. Now it's your physical well-being -- socialized medicine and control of your body. And, after that, they'll want more." Read the whole thing.

Fishersville Mike has an editorial cartoon on ObamaCare. The perfect storm, you know.

In the mood for a little fairy tale? Carol at No Sheeples Here! has a fractured fairy tale for you. I click over to her place several times a day, anyway, just to see what those sheep are up to.

Pundette is loving the "wee-weed up" story (and linked mine, too!) with her posts here, here, and here. It is something you'd have to write in your diary, no? The day the President of the United States, the Leader of the Free World, used the expression "wee-weed up"? Hehe, and don't miss Althouse!

And I love Bride of Rove: she's worried about wee-wee, too.

Reaganite Republican Resistance has a nifty post on the doomed Democrats and the state of Obama now.

Political Byline has some analysis of Air America's calling Obama a facist. It is truly stunning.

Donald Douglas at American Power looks at town halls and some of the blogosphere reaction to them; he offers this assessment: "... it's the totally condescending approach Democratic-lefitsts take to those of differing opinions." I don't want to be contrary but I think sometimes that goes both ways. I adore Rush Limbaugh but I bet many a leftist would call him condescending. But, I get Donald's point. Read the whole thing.

Little Miss Attila takes a look at the Death Panel conundrum and Charles Krauthammer's analysis of it. And Sarah Palin. And Medicare. Also on the subject of Krauthammer, Ruby Slippers thinks he's "missing the iceberg."

The Daley Gator concludes that the ACLU is pretty much worthless.

Gateway Pundit has a roundup of Recess Rally Day.

WTF? Some dude took a Corvette to a Cash for Clunkers trade? OMG. Jimme has the video. Fausta also has commentary on this.

Carolyn Tackett has the story of that 17 year old girl who fears honor killing for converting to Christianity. Heartbreaking story.

Legal Insurrection has a scary health care video. It's John Stossel and it's very good.

Heh, and now from Left Coast Rebel, a laugh:

Chris at Wyblog has some comments about the release Lockerbie bomber.

Yukio has a black cloud over him right now. Fingers crossed for you and your hard drive, Yukio!

Sippican Cottage. Sigh. What a beautiful, beautiful piece. Why oh why can't I write like this?
I'm just content at this point that he can because then I can read it. Lovely.

Generation Patriot examines the co-op alternative to public option and comes away unimpressed.

Okay. I'm off to do nothing now. Enjoy your Saturday!
Posted by Pat Austin Becker at 8:38 AM

Am taking a day off too but it just turns into another to-do day. Go figure!