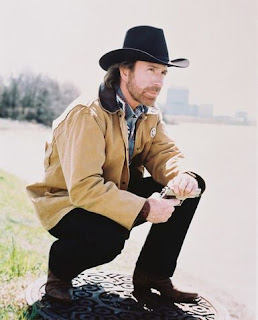 If anybody can get Obama to show his birth certificate, wouldn't it be Chuck Norris?

Chuck Norris has penned a birthday letter to Obama in which he asks the president to, once and for all, produce the document if for no other reason but to diffuse the birther controversy.

"I'm writing you because this is no longer a matter merely about proving a presidential prerequisite in the Constitution. Refusing to post a copy of your original birth certificate is an unwise political and leadership decision that is enabling the birther controversy. The nation you are called to lead is experiencing a growing swell of conspirators who are convinced that you are covering up something. So why not just prove them wrong and shut them up?"

Sounds logical to me. Norris goes on to point out that in the interest of "transparency" and openness in government, why not reveal the original document, and move on.

Will Obama do it? Remember, Chuck Norris doesn't breathe air; he holds air hostage. I'd do it, if it were me.

When Chuck Norris does pushups, he doesn't push himself away from the earth, he pushes the earth away from him.

Not that he would produce it if it acutally existed ...

No. Obama gains more by not producing an original birth certificate because letters like this one just make the conservatives look crazy as bed bugs. It keeps them distracted and unfocused and that allows Obama to shove through his agenda and rpevent a front runner from challenging him from the right.

That letter is perfectly reasonable, of course, but as I said before - he was hatched anway. Reptillian.

If I were Obama, I wouldn't do it. If you put that to rest once and for all, all of the energy people are expending in the 'birther' controversy would be spent in opposing his healthcare plan, stimulus etc.

Forget it, even if Obama isn't a natural born citizen, it's too late.
What needs to be done now, and borrowing from the Bride of Rove, is to concentrate on what Obama and his ilk are doing to this country, discuss those issues more, and make them look like they're crazier than bed bugs