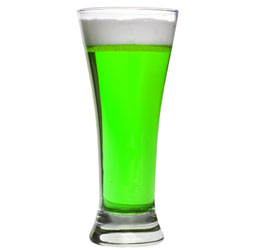 Happy St. Patrick's Day!  Mr. SIGIS and I are loafing about today and taking it easy.  I ran errands this morning and went by my mother's then came home and cooked corned beef, cabbage, and roasted vegetables for dinner.  No green beer but we have plenty of non-green beer.

It seems that the whole world is playing Draw Something.  I've finally succumbed and downloaded the game (SIGIS Pat) but I'm terrible at it.  The first word I tried was "picnic" and let me just say, that didn't go well.  I'm not very imaginative and way too literal.  I haven't yet had the nerve to challenge my son-in-law to play; he's an architect and his drawings come with a detail and accuracy I can only dream of.  Oh, the joys of idle time!

In the spirit of St. Patrick's Day, Pecan Corner has a wonderful looking recipe for Irish Soda Bread.  When I get off this low carb diet I'm going to try it!

Bride of Rove doesn't hold back her disdain of Panetta:

So. My husband sold the golf cart and boat stuff to buy an M16. Because … Really? Every household should have one. Actually what he said was, he believes that “when Obama gets re-elected the assault on the ability of US citezens to own guns will begin in earnest and you are an idiot if you don’t stock up now”.
Noted.
But why an M16?
Husband: Because they are cool.
Me: Why isn’t it in the gun safe?
Husband: Because the gun safe is full.
Next purchase? A second gun safe, I guess. Hopefully he’ll get bored with this and buy another boat. Hopefully. At least I know Panetta won’t be stopping over anytime for dinner … because he’s afraid of guns. And we have them.


She reports that Mr. Bride of Rove fully expects Obama to be re-elected and for an assault on gun rights to begin.  The NRA is concerned about that, too.

Goldfish and Clowns argues for more civility in discourse.

Zilla needs your prayers and your help.

Louisiana Educator updates Jindal's education reform package which is quickly making its way through to the House floor.  The Hayride has a massive aggregation of links on the subject.  The Hayride also quotes Senator Mary Landrieu in what must be the biggest face palm statement of the month given her role in the ObamaCare mess:

"The Governor is advancing one of the most far-reaching education reform packages of the last two decades.  Many individuals and respected organizations favor the thrust of what these proposals seek to accomplish. However, ample public debate is wise and necessary. Oftentimes, policy measures that are muscled through without reflection and discussion are dismantled later.


“If the goal here is true, systemic and long-lasting reform, not only does the Legislature need to buy in, but so do citizens in every parish and every region of our state. A good reform package will survive a thorough review, because it will survive on its merits."

I'm out for now.  Time for a beer refill and maybe I'll make it green.
Posted by Pat Austin Becker at 7:09 PM

That's one heck of a green beer!