A Lot of Red Tape


Your chart of the day courtesy of The Heritage Foundation: 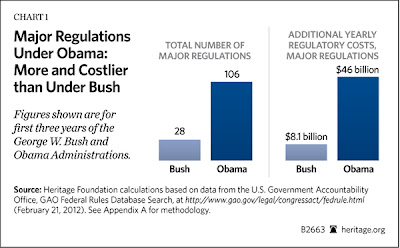 This week’s chart tests Obama’s claim by looking at the number of major regulations imposed by each administration. Major regulations, as defined by the government, are regulations that cost up to $100 million or more each year.

And once again, the Koch, errr, "Heritage" Foundation generates its typical "buzz".

What, in your brilliant opinion, would be a reputable organization that puts out reliable information concerning Obama?