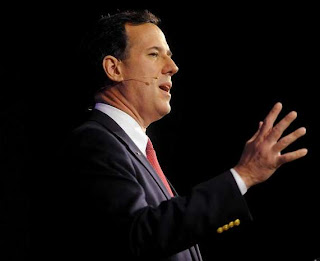 Rick Santorum in in Shreveport today and spoke to two congregations at Sunday services.  This via The Shreveport Times.


Republican presidential candidate Rick Santorum gave personal testimony to congregations at First Baptist Church in Bossier City and Calvary Baptist Church in Shreveport this morning.
During his term as senator, Santorum fought against partial birth abortion, though the bill was vetoed by former President Bill Clinton.
“During that course in time, my faith life grew,” he said. “I started reading more and really trying to develop that relationship and be that husband and father.”
Santorum said losing his son, Gabriel, shortly after birth and being the father of Bella, a 4-year-old special needs child whose life expectancy was only days, has strengthened his relationship with God and made him even more pro-life.
More as it develops. 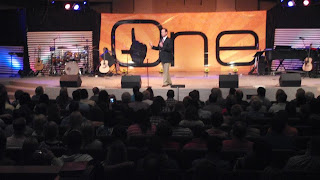 The comments there are interesting.  Santorum is drawing some heat for speaking in churches, for speaking at white churches, and for apparently being in politics in general.

Update 3:  From the KTBS story:

"I think it is important for candidates to let us know who they really are," Caroline Goodwin told KTBS after hearing Santorum speak at the First Baptist Church of Bossier, and he did give church goers a peek into his real life. He told the sometimes tearful crowds at First Bossier and at Calvary Baptist Church in Shreveport the story of when he and his wife lost a baby boy.

KSLA also has a story:

The candidate was not made available to the local media while he was in town, but KSLA News 12 was able to reach him on the phone, where he reiterated his stance on deregulation. "I have said on day one I would repeal every high-cost regulation that the president has put in place. He has set a record on the cost to the economy, over one hundred million dollars a year."
Also high on his list, said Santorum, the repeal of so-called 'Obamacare.'


On a related note, both Romney and Gingrich are headed to Shreveport this week, too.  So far the only announced appearance for Romney is a pricey fundraiser at The Petroleum Club (the average Joe won't be able to see him without forking over $1000, or $2,500 for a photo op.)


Newt will have two appearances:

Former Speaker Newt Gingrich will be in town Monday evening for a fundraiser at attorney Norman R. Gordon's home.  Admission to the event is $250 per person.

On Tuesday morning at 8:30 Gingrich will hold a town hall style meeting at  Strawns Eat Shop Too on East 70th Street.

The appearance at Strawn's is free and open to the public.