How Long Before the EnviroWackos Come Out on This One? 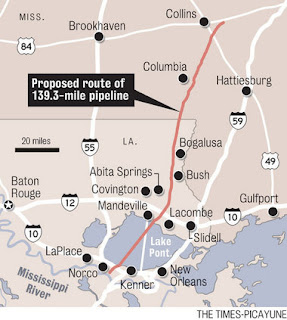 Not long at all, actually, as indicated in the comments following the article.

Plans to construct a $220 million pipeline that will transport gasoline and diesel from the Valero St. Charles Refinery in Norco to a pipeline hub 139 miles away in Mississippi are on track to begin this summer, company officials said last week. Kinder Morgan Energy Partners, a Houston pipeline transportation and energy storage company that has about 550 employees in Louisiana, announced last September that it would build and operate the pipeline in a joint venture with Valero Energy Corp.


The proposed pipeline will cross Lake Pontchartrain which is making some people nervous.

And anytime you say "wetlands" people get nervous:

The pipeline, expected to be in service by 2013, will have an initial capacity of 110,000 barrels per day, with the ability to expand to more than 200,000 barrels per day. The anticipated impact in the Louisiana coastal zone, a 5.3 million-acre area that includes 40 percent of the nation's coastal wetlands, involves the excavation of about 24 acres of wetlands and uplands and 38 acres of water bottoms.


I guess Darryl Hannah will appear any time now.

Maybe we'll get lucky and the libs won't hear about this one.
Posted by Pat Austin Becker at 10:01 PM