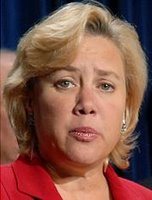 Because 18 years in the Senate isn't enough; via NOLA:

U.S. Sen. Mary Landrieu says she "definitely" plans to run for a fourth term in two years.  The Democrat from New Orleans tossed aside speculation that she was going to end her congressional career after 18 years in the Senate.

Landrieu wouldn't comment specifically Monday on whether she expects Republican U.S. Rep. Bill Cassidy of Baton Rouge to challenge her.

"I do not know who my opponent will be. I'm sure I'll have one, and I'll be ready for whoever it is and plan to win," she said.

Louisiana Purchase Mary isn't worried.  She suggests she is way different from Obama and that his low ratings won't affect her chances at all.  Bwaahahahahahahahaha!  Okay - go with that one, Mary!

Landrieu said, "My record is very different than the President's, and people will judge me on my own record."

I've often said she is the greatest whore in the history of Lousiana and that is saying something!

Actually, I'd like to see Bobby Jindal run against Katrina Mary. I think he could beat her. But, that would be no loss - Mary could go to work in Washington as a highly paid lobbyist - a much more lucrative job than being a U.S. Senator.