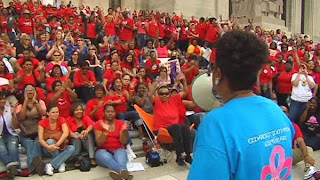 The education debate is about to blow sky high in Louisiana.

As previously posted, Governor Bobby Jindal has sweeping reform ideas.  His plan is here.  In short, Gov. Jindal wants to expand his Recovery District Voucher program throughout the state, reform teacher tenure, and expand charter schools among other things.   (Here's the PDF of the charter/voucher bill as introduced).

Now that the Louisiana legislature is back in session, Jindal's education reform package is cycling through committees.  Hundreds of teachers (not this one) played hookey today to protest Jindal's ideas in Baton Rouge:

At least four public school systems – Baker, St. Martin, Vermilion and East Baton Rouge – and several Baton Rouge charter schools canceled classes because teachers will be rallying at the Capitol today and tomorrow, according to local media reports. In other parishes, many teachers said they still planned to make the trip using personal days even though school won't be cancelled; substitute teachers would be filling in.


NOLA has an editorial about the protest today:

Shutting down schools so teachers can rally against education bills in Baton Rouge sends a disappointing message about their priorities, and it's a shame that some school districts are taking that step. Students are expected to show up in class every day, and no less should be demanded of those responsible for educating them.

But many teachers are heading to the state Capitol this week when the House and Senate education committees take up Gov. Bobby Jindal's education legislation.

Politically active union leaders should refrain from separating teachers from their classroom responsibilities with standardized testing set to begin, business representatives and reform proponents are arguing in response to recent school board actions.

On Monday, the Vermilion Parish School Board and the St. Martin Parish School Board approved a “professional development day” so that teachers would be able to attend a Louisiana Senate Education Committee hearing now scheduled for Thursday. Meanwhile, the East Baton Rouge Parish Public School system has canceled school for Wednesday now that over 900 teachers have said they will be absent.

“Our board felt like it was important for our teachers to have a voice in the legislation that will impact them,” Charlotte Waguespack, assistant superintendent in Vermilion Parish, said. “Nothing specific was mentioned, it was just a general concern about the overall package.”

Via NOLA's live coverage, Senator David Vitter weighed in on the protest:

Sen. David Vitter, a Republican, took aim at teachers for coming to the Capitol in the first place rather than remaining in the class room: "As a Louisiana citizen and parent, I'm really outraged. I guess the folks behind this are making their priorities clear--forget the kids; we just care about our tenure protection and benefits. This is exactly what's wrong with the system. These folks steal a day of learning from the kids to lobby on the taxpayers' dime. And what happens? They're rewarded with a 'professional development day' to do it."

Steve Monaghan of the Louisiana Federation of Teachers defended the protest:

"This body could have had a meeting just like on a Saturday," he reminds lawmakers, i.e. "teachers didn't set this schedule." Another process complaint from Monaghan: Long, complicated bill, introduced March 3 being scheduled for a vote on March 14.


There are a number of teachers in the state who feel Jindal is "waging a war" on public education.  One (who asked to be anonymous) told me:

I regularly put in nine hour days at school then bring home papers to grade at night and on weekends.  I have weekly faculty meetings after school, sometimes before school, professional development on my planning period, workshops in the summer, (and the summer is shorter every year), more responsibilities, accountability, and paperwork piled on me each year while the students are held to very little accountability.  Now my governor wants to raise my retirement age to 67 while making me also pay more into retirement.  With the new VAT, half of my annual evaluation will depend on student performance - even the student who is just holding time until he's old enough to drop out.  Why is what I'm doing never enough for this governor?


Teacher morale is at an all time low on many fronts.  The new evaluation system that teacher references can be found here.  In short:

Act 54 calls for measures of student growth to comprise at least 50 percent of all educator evaluations, thus the new statute establishes a student-based method to assess success and incorporates other measures of professional practice in the remaining 50 percent.   To provide educators with consistent feedback, the new law also requires this process to be administered annually, instead of every three years.  Likewise, Act 54 requires intensive support for teachers who are identified as struggling.  Although thousands of educators have participated in pilot programs utilizing each of the components of the new evaluation system, the full model will be officially implemented in the 2012-2013 school year.


Some of the teachers at the protest today are worried about the fast-track Jindal's legislation is on:

In fact, 113 amendments to the bill were introduced on the floor of the Capitol Tuesday night. The proposed changes led to a late night of work for the state's lawmakers.


NOLA has live coverage of the committee hearings here.

As this debate unfolds in the coming days it is sure to be contentious.  Governor Jindal is adamant about the need for reform and is dedicated to seeing it through with as much of his wish list in tact as possible.  Here is his opening statement today (more video on Jindal's Facebook page):

Check back for more as this debate unfolds.
Posted by Pat Austin Becker at 6:37 PM

Wonder why they couldn't have held hearings on a weekend when teachers could attend?
Guess my question sort of answers itself.

Pat, I'm glad you're on this. I really haven't had time to follow it, and will be checking in.

You would think that teacher who is so overworked with paperwork, accountability, and responsibility (workshops, really? Weekly faculty meetings which could be done monthly for all the good they do?) would welcome education reform that might eliminate some of that unnecessary busywork. But that means getting the federal government to butt out of some things that are none of their business.