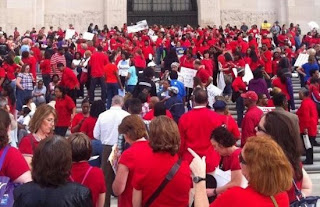 The lightening pace of Governor Bobby Jindal's education reform has slowed a little bit.  The next step for the package is the Senate Education Committee which is expected to take up consideration of the bills possibly tomorrow.


The two bills were adopted by the House after a session that ran from 9 a.m. Thursday until early Friday.House Bill 974 by Rep. Steve Carter, R-Baton Rouge, which establishes new employment rules for teachers, was approved by a 64-40 vote, and House Bill 976, which would expand charter schools and establish a statewide private school tuition voucher program paid for out of the financing formula established for public schools was passed, 61-42. In each case, as many as a dozen members from each party switched sides.

The two bills are anchors of an ambitious agenda that Jindal pitches as a way to improve student performance and, in turn, economic opportunities and overall quality of life in Louisiana. The tenure changes have drawn the ire of teachers associations and rank-and-file educators, who accuse the Republican chief executive of a frontal assault on public education, classroom teachers in particular.


The reform has been contentious and controversial at every step.

Many are unhappy with the speed with which the legislation is being passed.  It is, some think,  reminiscent of the way ObamaCare was bullied through in Washington and passed in the dead of night.  There's been no time, really, for public debate; not much time to contact legislators.  This is probably by design.  Oh, there have been teachers protesting on the steps of the State Capitol, but no real legislative hurdles have slowed Jindal's reform package which has often kept House members in session late into the night:

Late into the night, the House debated a second Jindal initiative on its way to approval in some form. House Bill 974, also by Carter, would curtail teacher tenure and scrap the existing teacher salary matrix, tying public school instructors' job status and pay to student performance measures.

The session is open until early June; what's the big rush that we have to have legislators staying in session through the night, rushing debate, curtailing public input?

Why debate at all?  NOLA is declaring this whole spectacle to have a "predetermined outcome," anyway.

No matter what side of the issue you're on, nobody can disagree with Rep. Steve Carter (R.-Baton Rouge) who said:

"I want to give every child in Louisiana an opportunity to succeed. ... These are the most important bills we can ever consider."


But, doesn't the fact that this is "the most important" education legislation we can consider merit more debate rather than passage at warp speed?

Don't misunderstand; clearly reform is needed.  But Jindal's plan will not solve the problem.  His plan is based on three main tenets:  get rid of bad teachers through tenure reform, enable parent choice through a voucher system, and restructure the pay scale to reward effective teachers.  It sounds good enough on the surface, right?  But there are still too many unanswered questions.  It's like you have "to pass the bill to find out what's in it," it seems.

Rep. Sam Jones, D-Franklin, said, "We had amendments today where the authors didn't even know what was in them. ... When we finish here, the press is going to read these bills and tell us what we did." 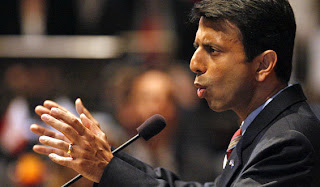 Many questions remain.  Where's the part about parent and student accountability?  While the reform package expands the voucher program statewide, will private and charter schools be forced to take these students whose parents are trying to flee ineffective schools?  Will they all go under a lottery system or will admission standards prevail?  What will the governor do about those students who wish to leave under-performing schools but can't meet the admission standards of a private school?  What will be the accountability for those private schools?  Will they be scored the same way public schools are?  And will their teachers also fall under Actt54 and be graded effective or ineffective based on student performance on standardized tests?  How is this plan going to help those struggling public schools other than boot "ineffective" teachers out of the way?  In calculating that "ineffective" label, do you take into account the difficulty these days in removing a disruptive student from the classroom?  Will the state untie the hands of local administrators in dealing with discipline issues that certainly have an impact on a school's performance?

While national bloggers like Tina Korbe can sit in judgment of these protesting teachers, mocking their protest as "cornily themed," now might be the time to slow down and find answers to these questions and common ground on which we can all agree.  And while Korbe slaps the protesters on the wrist for not being in the classroom, she fails to explain when or how she thinks teachers might register their discontent with the Governor's steamrolling agenda or recognize that some of those districts from which those teachers come might be on spring break (as Caddo and Bossier parishes are, for example.)  Since the Legislature is meeting during school hours, when should the dissenting teachers protest?

As a public school teacher, I found this remark of Korbe's particularly offensive:

Still, protests like these suggest that adults care more to preserve the system than to improve the quality of education children receive. They also smack of a certain elitism that assumes union leaders know better than individual teachers and teachers know better than parents how to raise and educate children.


I don't agree that protesting necessarily means a desire to preserve the system as is.  Nearly everyone agrees that some reform is needed; we have far too many kids in this state performing below grade level.  And I disagree that registering dissent "smacks of a certain elitism" or that it means that I as a teacher think I know more than the parent how to educate children.  I believe that not enough parents are involved in the process, actually.  In schools with poor demographics, for example, all too often the parents are never seen or heard from, yet under Jindal's plan they get a pass while the teacher gets hung out to dry.

The battle for education reform is nowhere near done in Louisiana but is underway and that's a start.  But Governor Jindal needs to slow it down a pace and listen to the people on the front lines.  Last time I checked, he hasn't spent any time teaching in the public school system.  There's room for us all to agree on the major issues if he'll just slow down and let us find the path.

For more on the education battle in Louisiana, The Hayride has a great aggregation of links.
Posted by Pat Austin Becker at 3:23 PM