Take a Trip to Logansport, Louisiana 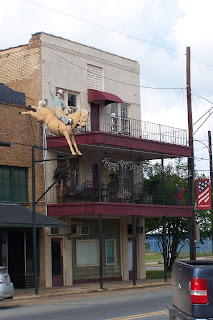 Eager to get some more bug guts on the front of the new Jeep, Steve and I took off on a day trip to Logansport, Louisiana today.  We've never been on a day trip there and thought it might be interesting.

Logansport is an historic town (founded in 1830) nestled on the border between Louisiana and Texas.  At one time it was a bustling little town with the lumber and cotton business and the river boats steaming through.  The Sabine River marks the border and they've got a nice park there on the river and a Veteran's memorial wall.  The town holds festivals and celebrations there including the popular River City fest in May.

Before we set out on our adventure I hit up FIVE estate sales this morning.  I found a couple of glassware things to add to my collection but the real treasure, to me, was this cool book of WWII stories by Associated Press reporters; it was published in 1945 and has a section of full page black and white photos. 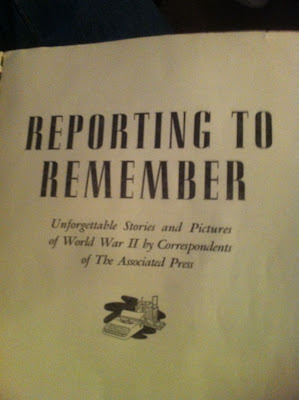 Here's part of the table of contents: 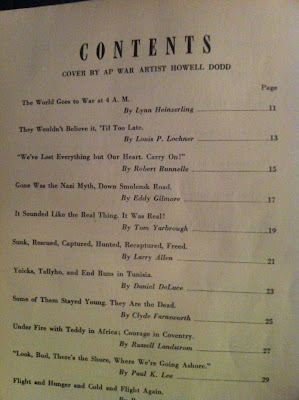 I also found this little treasure for Mr. SIGIS: 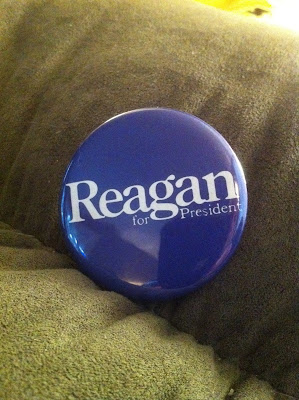 So on to Logansport.  We like to take the back roads whenever we go anywhere.  We stopped in Keatchie when we saw an antique store.  I liked this sign: 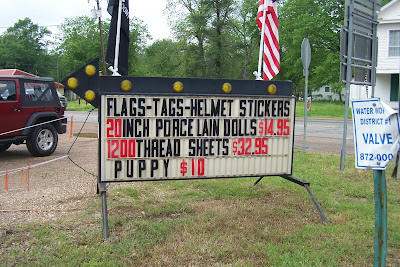 All your needs are covered there, right?  The people in that store were really friendly and they had a beautiful pointer dog behind the counter.  Across the street was this neat old building (I love old historic buildings): 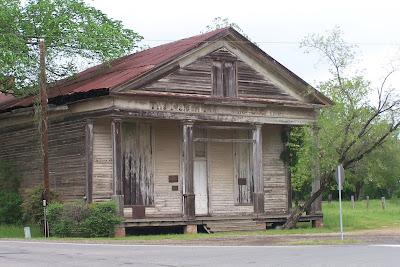 I like the tree growing out from under the front porch.  The place was apparently a mercantile store at one time: 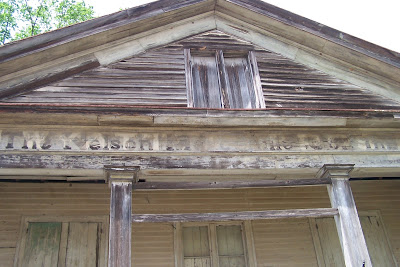 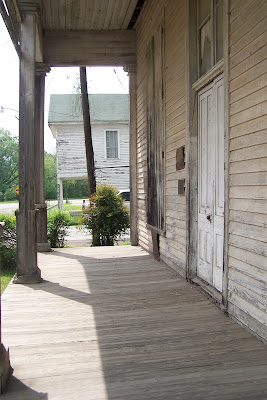 So from there we headed on down the road to Logansport.  There's not a lot there anymore but everyone we met and dealt with could not have been friendlier.  The Georgia Pacific plant there has closed and the economy is hurting down there; plus they're widening a nearby highway which will bypass the town and just about shut everything down, I guess.

We stopped at ate at The River's Edge restaurant, run by Rosemary Grimsley.  We went there on the advice of Janet Palmer who runs N. J. Carraway & Co. hardware and mercantile store. 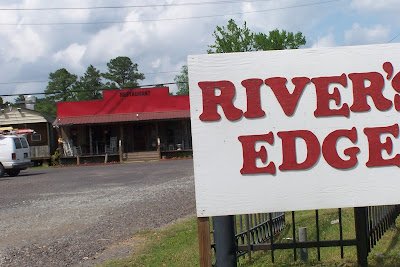 Steve had fried catfish and I have a big ol' bacon cheeseburger.  Both were great.  Rosemary could not have been more friendly or hospitable and I only wish we had gone after 5 p.m. when you get complimentary hot water cornbread and bean soup with every entree!  Everything is home made there; the hush puppies that came with Steve's catfish were the best I've ever had; they were the size of golf balls and seasoned with jalapeno and onion.

We stopped in at Doug's Jewelry & Antiques on Main Street; he had some cool military collectibles and some cool clocks.  Lots of military books and flags.  A few political signs: 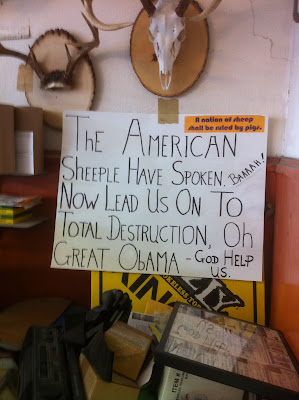 I bought a book there and we went on down to N. J. Carraway & Co. 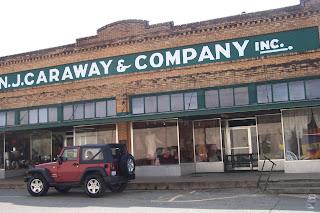 It's the oldest operating hardware store in Desoto Parish: 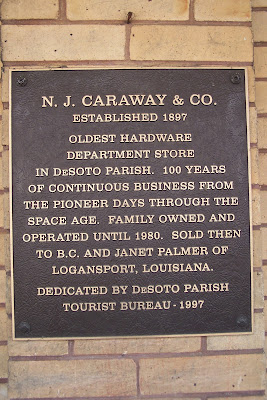 There you can buy everything from blue jeans, bib overalls, scented candles, antiques, and all your hardware needs. 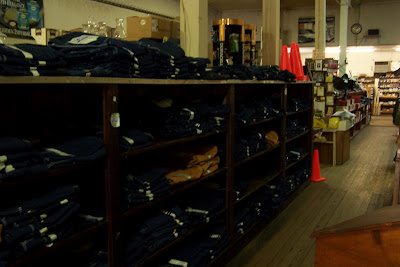 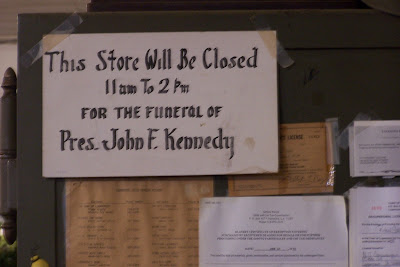 We bought a couple of cookbooks that proprietor Janet Palmer showed us: The Louisiana Proud Collection of Home Cooking and The Louisiana Proud Collection of Sweet Things.   Each consists of over 200 recipes and drawings from all over the state.  The author  crisscrossed the state taking photographs and making sketches of historic buildings in every town and in each town he obtained a recipe. From the forward:

"Two hundred and seventy six people, all from different towns, gave us a recipe.  Each page contains one recipe, an illustration of a building in that town and the contributor's name." 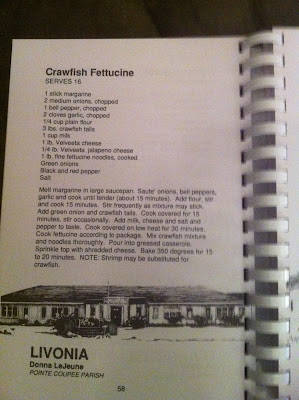 We heard there was an antique mall in Tenaha so we ran on down the highway but we missed it; they closed thirty minutes before we arrived.  Steve liked this mural, though: 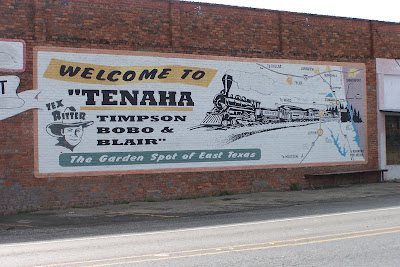 With everything shutting down for the day we headed on back to Shreveport.  Just outside of Carthage Steve pulled over at the Jim Reeves memorial: 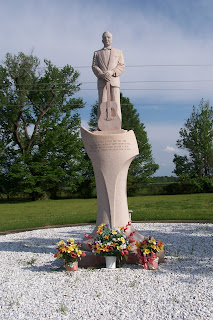 The walkway leading up to it is neat: 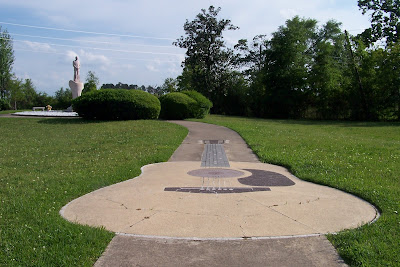 All in all it was a fun day.  As I said, the people in Logansport could not have been nicer or more friendly.  It's definitely going into our rotation of day trips.  We thoroughly enjoyed the beautiful drive down the back roads, looking at the historic homes and buildings, and partaking of the local hospitality.

What fun! Thanks, Pat.

What fun!
Thanks, Pat.
Look forward to more bugs on the Jeep.

Thank you for visiting Logansport, we are glad that you enjoyed you visit. on behalf of The Chamber of Commerce and River City Fest we hope you will come again. River City Fest is May 16,17 &18 this year. Krewe of Aquarius would like to invite you to come in February 15 @ 6 pm for our Mardi Gras Parade.