Not Exactly a Full Metal Jacket Reach Around 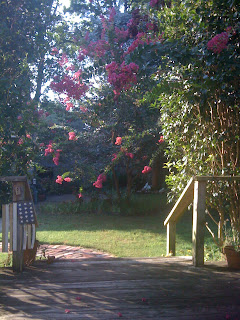 Spring seems to have sprung around here; I've spent the day doing yard work and bagging up leaves that have been hiding out in flower beds and nestled up against the side of the house.  My back yard needs some serious work this spring.  It used to be lush and beautiful but we got a Lab puppy two years ago and last year we had a severe drought.  (This picture is from better days).  Between the two I'm not sure what can be saved out there.  I'm definitely going to be in the market for some sod and there's no question that several shrubs will have to be replaced.  I'm probably going to need some dirt, too; when a dog digs a hole where in the world does the dirt go?  There's never enough dirt nearby to refill that hole.

Mr. SIGIS is watching a spring training baseball game and I'm surfing the blogs trying to catch up on things.

I stopped first at Political Clown Parade who has a post about Andrew Breitbart.  In that post the Curmudgeon also comments a bit on blogger burnout and the infamous mental hiatus.  She reached such a low point last year that she even took her popular blog at the time down.  Regretting that decision later, she is back at it with her current blog:

Last year, I gave up blogging and closed down a site from which I blogged. I was in very bad health and cynical about politics. I had become a timid soul. I had blogged there for several years hoping to make a difference. My health and my cynicism affected my decision. Admittedly, it was a mistake. I regret having taken down the site. After a short time, I decided to rejoin the fray at this site.


I have to say, I gave some thought recently to going dark myself.   I eventually dismissed the idea but I did rearrange my priorities and expectations.  Getting "a million hits" is no longer a priority and not even that important.  Staying inside at my keyboard during all my spare time is no longer a priority either.  I decided instead that it was more important to live life than just write about it.  There's a balance that must be maintained and for a long time I was out of balance.  I think I've made that adjustment now.  Fingers crossed.

And bless his heart, William Teach is still linking me even though I've been basically AWOL for weeks.  Thank you, Teach.  I do appreciate you!  I know there are a few others but Technorati being what it is these days makes it hard for me to tell.

At any rate, the Curmudgeon was paying tribute in that post to Andrew Breitbart and his relentless pursuit of the good fight for conservatism.  Be sure to check it out.

One of the topics I've really been reading about and mulling about posting has been Governor Bobby Jindal's education reform plan.  I touched on it briefly but there's a lot I really want to get into and read about.  I'll be honest, though...I'm cautious about writing too much about it at this point.  In the first place, there just aren't enough specifics beyond just his wish list and in the second place, I'm trying to consider workplace politics.  It's weighing on my mind, though.  I'll get back to it.

Bride of Rove has some spot on thoughts about politics and the discussion of issues.  In fact, I saw this post on her Facebook wall the other day and figured she'd pissed somebody off:

Can I just say this? If you don’t want to discuss politics on Facebook then don’t post political opinions and links. It is beyond blond to think that everyone is going to either completely agree with you or ignore you and move on. You want a discussion? Post. You don’t? Then don’t post. One of my absolute favorite friends to debate with is (name redacted) because she is smart as a whip, can back up her opinions with facts, and because she and I don’t always agree I actually learn quite a lot from her “salons” … and that’s how it used to be back in the day. People who want to ponder the issues that affect us all and consider all sides, politely and sometimes passionate but impolitely, hosted teas or gatherings and people discussed.

People who disagree with your current views on issues are not the antichrist. You post and it is an invitation for a discussion. Not abuse, of course, but discourse? Definitely.


There's more, but you'll have to go there to read it.  I don't ever want to make that woman my enemy.   One of the hardest things for me to get used to about blogging was how vicious people who disagree with you can be.  During the '08 campaign I had lots and lots of readers who disagreed with me and who did not hold back one iota when it came to telling me what an ignorant, flatline brain I had.  It used to hurt my feelings, sometimes it made me question myself, and then it pissed me off.  Now I've toughened up and realize that there will always be weird people out there and most of them will disagree with me.  I decided if I was going to be sensitive about it then I should quit putting my opinions on the internet.  Yeah, so I quit being sensitive.

Another person I don't ever want to get on the wrong side of writes over at Pecan Corner.  Tina is taking no prisoners in her disdain of those companies that are canceling their advertising contracts with Rush Limbaugh:

I can appreciate that your companies have the freedom to determine for yourselves where you will spend your advertising dollars, and I hope you will continue to have that freedom for as long as your companies exist.

I'm sure you will also appreciate my exercise of freedom of choice when I politely say it's nothing personal (and I don't even listen to or watch Rush), but I will never spend a single dime for any product your companies produce - not even years from now. The older I get, the better my long term memory will become and I will not relent, even when it's a moot point.

Doug Ross has a few thoughts on what's wrong with the Chevy Volt:

• The Volt has an annoying habit of sometimes blowing up

• It's a coal-powered car

• It's the result of central planning, as opposed to actual market demands.


Again, there's more - RTR.  No Volt for me.  Mr. SIGIS ordered my Jeep in early February and we're expecting to take delivery on that in a couple of weeks.  I can't wait!  Meanwhile, right now I'm driving a rental 2011 Ford Fusion which is pretty nice.  My son is driving my old Crown Vic while we get his insurance claim settled (nobody wants to rent a car to a 20 year old, you see, which is why I'm driving the rental).

Obama's war on coal plants is enough to shy anyone away from the Volt, aside from all its other problems, I would think.

Ah, well.  It's off to a hot shower for me.  Got to get the yard dirt off and get ready to begin my research paper unit this week with my sophomores.  Good times.
Posted by Pat Austin Becker at 6:45 PM

Been reading your blog for several months now and have never commented. I'm a conservative female in Shreveport and enjoy your writings very much. I hope you'll keep it up. Keep fighting the good fight and have a beer on me. ;)

Good morning, and thanks for the mention! Have a fabulous week! :-)

Coal-powered car! I've got to remember that.

Thanks for the link to Curmudgeon!