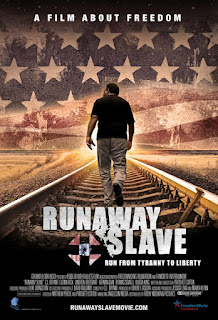 When Runaway Slave comes to a theater near you, drop what you're doing and go see it.

Having heard Rev. C. L. Bryant speak before, I thought I had an idea what to expect but I underestimated the power of the documentary.  It's very powerful.

Visually, the movie has a gritty, urban, edgy feel to it that contrasts with rural rolling hills and scenic neighborhoods as narrator C. L. Bryant makes his way from one city to the next, crossing America, ultimately ending up in Washington, D.C., where he movingly stands at the Jefferson Memorial reading lines from the Declaration of Independence.  I have to say, I got a tear in my eye on that one.

Bryant drives across the country asking black individuals along the way "Are we free at last?  Are you free?"  He strides purposefully across the nation and listens inquisitively at both Tea Party rallies and NAACP rallies.  He asks black Americans what they are prevented from doing today because of their skin color.

The only person who wouldn't, or couldn't, answer that was Rev. Al Sharpton who refused to speak to Bryant in the documentary.

C. L. Bryant tells of his journey from liberalism to conservatism.  He was a chapter president of the NAACP in Garland, Texas at one time, a position he lost because of his pro-life stance.  He also lost the position of pastor of his church because of his conservatism.  But Bryant has brought his message to a much larger audience now with Runaway Slave and it's a message that everyone needs to see.

The thesis of the documentary is the enslavement of black society by big government.  Bryant tries to determine why 95% of the black community votes Democrat and why the nation is still so racially divided. People like Rev. Jesse Jackson and Al Sharpton are described in interviews as "poverty pimps" because while they claim to represent the best interests of black America they are profiting from the continued degraded social status of blacks.

To support his thesis Bryant talks to many black leaders across America such as Alveda King who spoke strongly against Planned Parenthood and cited the high abortion rate in black society.  She noted the prevalence of Planned Parenthood in black communities and suggested they "target" black women.

I was particularly impressed with Marvin Rogers, author of Silence Makes the Loudest Sound.  Watch this clip:


He really impressed me and I'm ordering his book today (there's no Kindle version).

Steve was impressed with Mason Weaver.  He wrote a book entitled It's OK to Leave the Plantation.  Watch this clip of Weaver speaking in 2009:

Bryant spoke with many other black leaders and the takeaway is that it is the Democratic party that has enslaved the black community to a life of poverty and entitlements.  You are not guaranteed success by the Constitution, you are guaranteed opportunity.  Nothing is handed to you.

Bryant also talks with well known black  leaders like Allen West, Herman Cain, and Thomas Sowell, but it was the lesser knowns like K. Carl Smith and Kevin Daniels that impressed me so much.

The movie opens July 27 in wider release; right now it's just in Bossier City.  The film website is here.  There you will find release locations and dates, all the interview participants, and video clips.

If you're anywhere close to Shreveport/Bossier, go to Regal Cinema on Shed Road and see this film.  We were pleasantly surprised to see C. L. Bryant himself striding to the front of the theater as the credits rolled.  We gave him a hearty round of applause and then he was swamped with people who wanted to shake his hand and speak with him.

The film is powerful, moving, articulate, and speaks to all of us.  It's one that I'll want to see more than once and if you get a chance to see it, drop everything you're doing and go.


Update:
Linked at The Dead Pelican - the one stop shop for ALL news Louisiana!
The film has been held over through July 19th at Regal on Shed Road in Bossier.
Buy tickets here.

Related Posts:
Andrew Breitbart Talks About His Legacy With CL Bryant
A New Underground Railroad
I Dare James Earl Jones to Watch "Runaway Slave"!
Trading One Form of Tyranny for Another
Posted by Pat Austin Becker at 6:45 PM

Good review. I've heard good things too - and plan to see it tomorrow.

Good review - I plan to see it tomorrow. The question really though - is he reaching anyone that might have their opinion swayed?

Rex, yes it is reaching people who have never before thought about these issues. It has been seen in a couple of other venues at one-time-only events and several people in the audience remarked afterward that they had learned things they did not know before and had determined to consider things they had not before.

Rex, yes it has been seen by people that have remarked that they learned things they didn't know before.

Fantastic post Pat. I'll be looking into a lot of this.

Patriots! We need you ALL to go see this movie this weekend in Bossier City. You can purchase tickets on Fandango.com.

If you are tired of hearing Michael Moore, who hates America, help us get lines out of the door to see this GREAT documentary by Shreveport Bossier's own CL Bryant!!!

How can I view this movie? I live in south La, seems like it is only being shown in Shreveport and Bossier City(North La - about 4 hours from me). I don't have the time to travel up there.
Will it be on DVD soon?

How can I view this film? I live in south La, and it seems to only be playing in Shreveport and Bossier City (about 4 hours from me). Will it be on DVD release soon?

Right now the film is just rolling out and will be more widely released soon.

Thanks Pat!
Hopefully it will be shown down here. I am hungry for facts and for someone to boldly hold forth truth...

Would like to see the movie here in Hawaii...any plans to release it on iTunes?