Take a Trip to Dallas, Texas and the West End 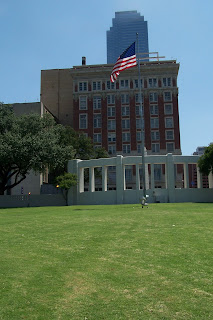 It's official:  we are grandparents!

It's amazing how quickly a little guy can get into your heart.  Steve and I left Benjamin and his parents in Dallas today and it was hard saying goodbye!  Happily for them, they were preparing to leave the hospital and head home to settle into new routines and a new life with their precious baby boy.

I posted a picture of him when he was born and will post one or two on this post but as Ben's parents are very private and don't want to run a play by play of his life on the internet we are certainly going to respect that choice.  But he's probably the cutest little boy ever!

We took advantage of this trip to do a couple of side adventures that have been on our list for a while.

Our hotel was near the DART so we took advantage of that as much as possible.  It just seemed silly to get in the Jeep and battle Central Expressway over to the hospital two or three times a day, so we took the DART.  We got on right by the hotel and got off right at the hospital.  Could not have been easier. 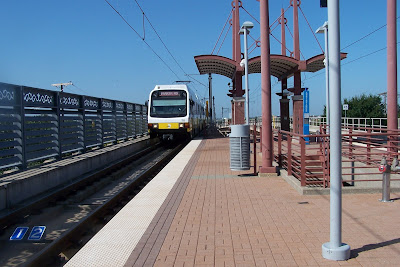 I like riding the DART and it all reminds Steve of the trains in Europe. 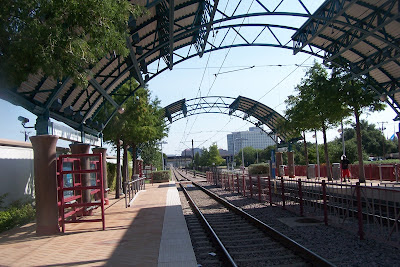 I'm a people watcher and I like to watch the people on the train.  Most are plugged into iPods, a few are reading, some doze, others stare tiredly out the windows.  I'm sure we look like the rubes we are as we gaze and point out the windows.  "Look at that building!"  "Oh, there's Taco Cabana!"

As we drove to Dallas after getting "the call," I stayed in constant contact via text with Ben's daddy and kept up with labor progress.  Ben waited for us to arrive; as we drove into the parking lot I got a text that said, "I see his head!"  Perfect timing!

We spent Wednesday afternoon at the hospital waiting and visiting.  Once baby and mother were settled into their room we left to check into the hotel and find dinner.

One of our favorite places to eat in Dallas is The Twisted Root.  As it happens, a famous Texan likes Twisted Root, too: 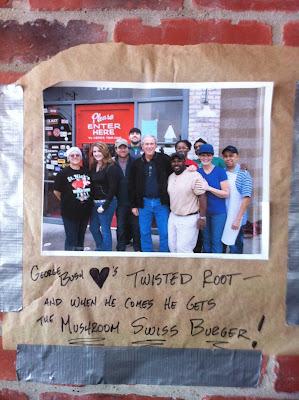 There are several locations and the restaurant was even featured on Diners, Drive-Ins, and Dives!  We love the sweet potato chips/fries and the spicy pickle chips. 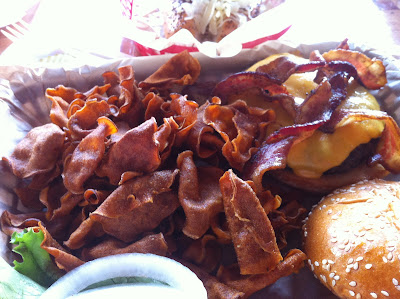 That is a bacon cheeseburger and sweet potato fries.  Fabulous!

We ran a couple of errands after we ate then went to the hospital to see the baby one more time before calling it a day.

Thursday we decided to jump on the DART and check out Dealey Plaza.  We've never been to the museum there and have always wanted to, so we did.  We, of course, stopped to see Ben who was sleeping: 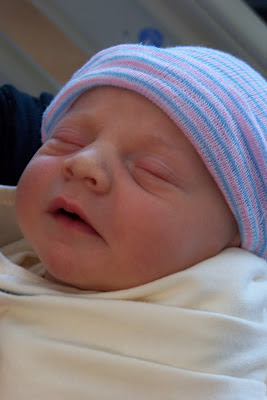 His parents looked a lot more rested than the last time we'd seen them so we left them to spend time with their baby and head out to the West End.

First stop was Sonny Bryan's Smokehouse.  We didn't have a lunch destination when we set out but it smelled so good the choice was easy.

The West End is that part of Dallas "where it all began," where the city was born.  It is now a historic district comprised of some 20 blocks and is filled with shopping, dining, offices and historic landmarks.  Many of the restaurants have patios or terrace dining and even on a hot day there's a breeze blowing through keeping things comfortable outside. 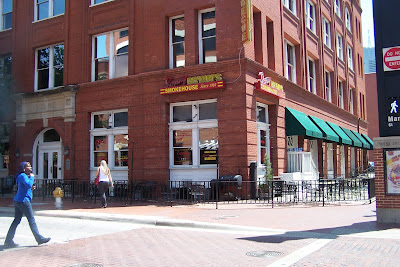 At Sonny Bryan's we both had BBQ plates: mine was a beef sandwich and Steve had the jalapeno sausage sandwich.  I got mac 'n cheese and he got potato salad and we both had the baked beans.  That Corona bottle is filled with BBQ sauce: 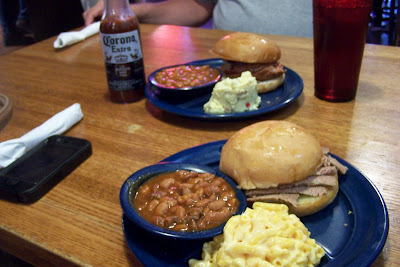 The atmosphere at Sonny Bryan's was as you'd expect, raw brick and wood floors, neon signs and a busy lunch crowd.  The service was fast and friendly! 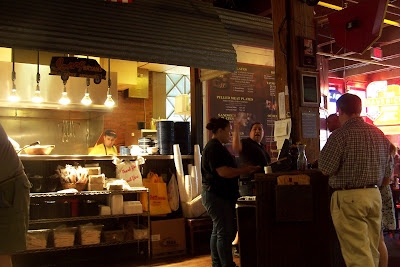 Once we'd stuffed ourselves we walked a couple of blocks over to Dealey Plaza.  We explored outside before going into the museum.  This is the old Textbook Depository from where Lee Harvey Oswald fired at President John F. Kennedy from the sixth floor corner window.  President Kennedy's motorcade was moving down this street, away from the building, when the shots were fired. 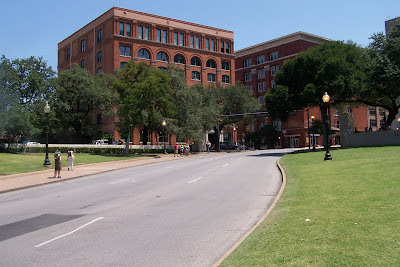 If you look carefully you can see one of the two "x" marks in the street.  Incredibly, people run out there and stand on the X to have their picture made. 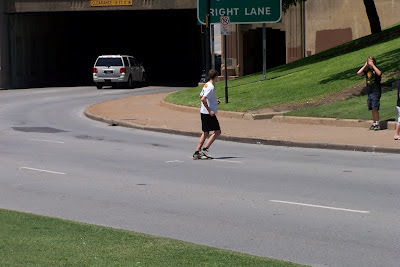 This strikes me as very dangerous and more than a little bit creepy, but whatever rocks your boat, I guess.  This isn't exactly a low traffic location and that's three lanes of traffic coming at you. 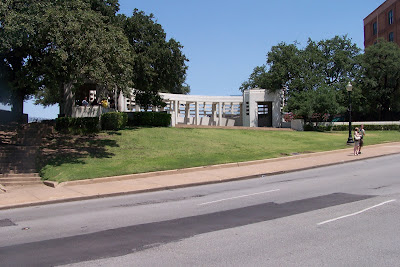 This shot looks toward the triple underpass through which President Kennedy's motorcade was about to pass: 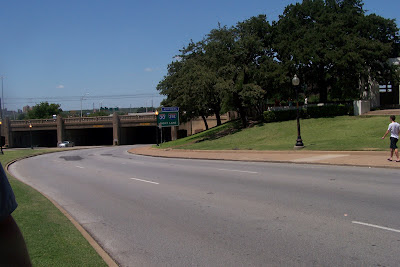 This is Houston Street and the reflecting pool; the motorcade drove north on this street, toward the Depository, then turned west onto Elm, passing in front of the Depository, where the president and Governor John Connally were hit. 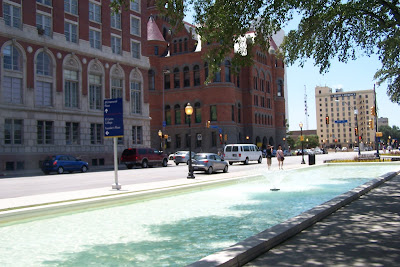 Today, the entire plaza area is, as I said, an historic district and preserves as much of the scene as possible as it was the day of the assassination.

No photography is allowed inside the museum.  No cameras, no cell phones.  Security guards patrol the exhibit and keep an eye on things. 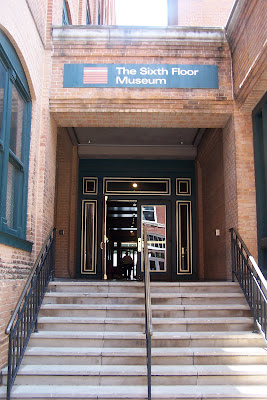 The museum consists of large photographic panel displays with textual information, artifacts and video.  You wind your way through and listen to a guide through headphones.  Periodically you are prompted to stop the audio tour and watch one of the short videos which might be of one of Kennedy's speeches, a press conference, or Walter Cronkite's coverage of the assassination.

The exhibit takes you chronologically though Kennedy's election, his presidency, the Bay of Pigs, the space program, the "Camelot" family life, and on through the assassination, the investigation, and the conspiracy theories.

The actual site where Oswald sat is preserved behind plexiglass.  Boxes of books are preserved behind this plexiglass cube and you can see how he arranged boxes upon which to rest the rifle he aimed out the window as he lined up his shots.  You can't actually get to the window  yourself, but on the seventh floor, which is gallery space, you are allowed to take pictures.  This is taken from the seventh floor just above the sixth floor window: 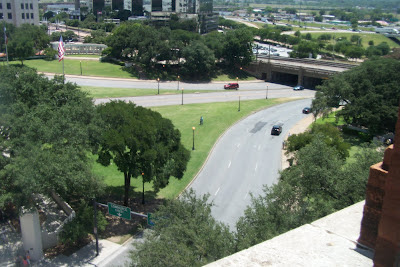 We enjoyed the tour and seeing the whole scene really gives you a better sense of perspective than just looking at pictures.

From there we took a quick trip into the Holocaust museum; it was right around the corner and I'd been wanting to go see it.  The museum is growing and will be moving to a larger facility in the near future.

The main exhibit takes you through a day in the Holocaust through several different perspectives.  This is a self-guided audio tour but there are often guides taking groups of school children through and we tagged on to one of those. 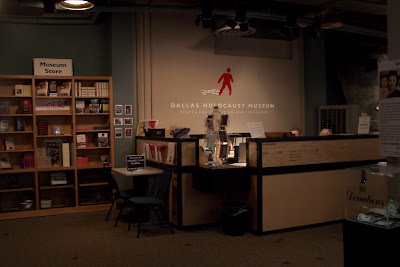 There are lots of photographs that are synced with the audio tour: 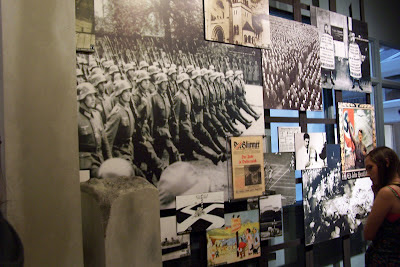 There are also plenty of artifacts: 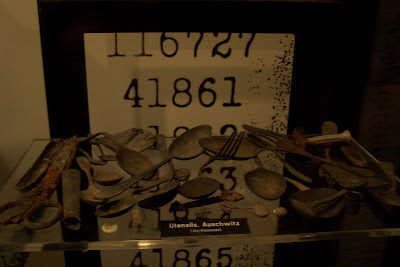 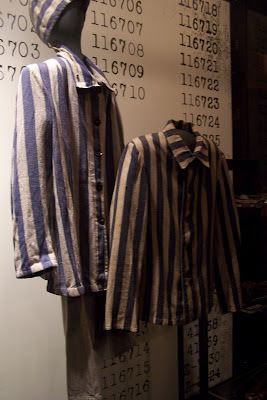 We were lucky enough to meet a survivor, Max Glauben, who was a child in Poland who smuggled food and weapons to the Jewish resistance in the Warsaw Ghetto.  He was sent to five different concentration camps.  Now he tells his story and hopes to teach young people about intolerance as a cautionary tale in the hopes that genocide and hate will not prevail. 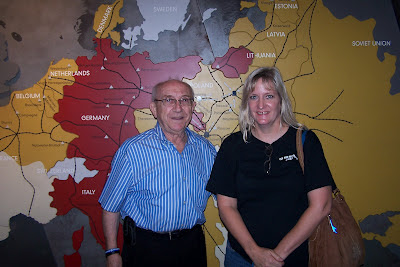 Mr. Glauben is a charming fellow who has cheated death several times (he's also a Korean War veteran and a cancer survivor).  Read Mr. Glauben's story here.  I purchased a copy of his DVD, "Plagues of the Soul" which he autographed for me.  I'll treasure it!

Exhausted from our day, we head back to the DART and the hospital to check on our little grandbaby!

I hope little Ben's mother will forgive me but I have to share this picture; I just thought it was so sweet. 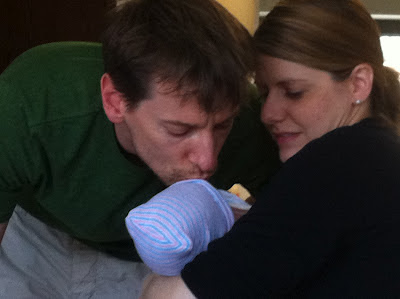 They're going to be wonderful parents and I can't wait to watch this little guy grow!

After a rest at the hotel we climbed into the Jeep and drove over to get some dinner at the Texas Land and Cattle Steak House.  It was close to the hotel and a good rare steak sounded just fine to me so off we went. 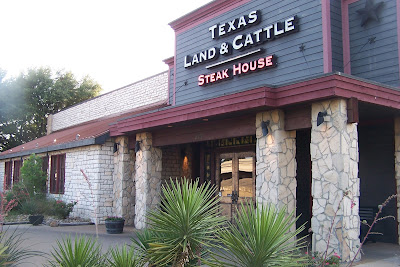 I highly recommend this place if you go to Dallas.  (They have other locations, too; check the site). I can't remember a time that I've had better, friendlier service.  Our server was friendly and helpful; when he learned it was our first visit he told his manager who came by to speak to us and gave us a card for a free appetizer on our next visit.  The food was perfectly prepared, the atmosphere was lovely, and the beer cold! 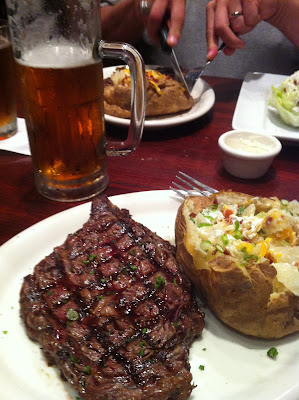 We had to go back to the hotel pool after that and swim off some of those calories.  I did slow, lazy laps, but I felt better when I was done.

This morning?  Back to see Baby Ben; the happy family was packing and getting ready to head home.

I guess it seems like we eat all the time, but people eat, you know.  So we grabbed lunch at Henk's European Bakery and Deli. 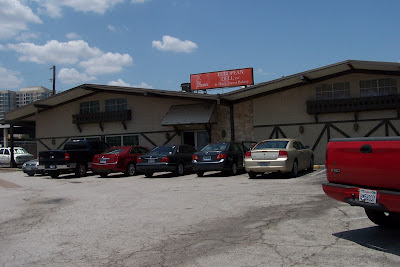 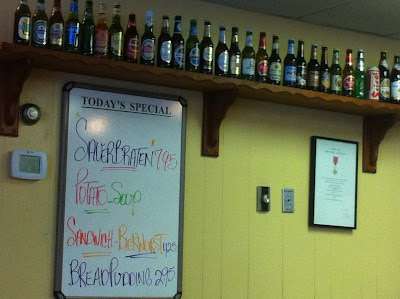 We both ate brats, red cabbage, and hot German potato salad.  I picked up a piece of chocolate raspberry cake to bring home and Steve bought a couple of rounds of crusty German bread.

Two hundred pounds later, I crawled back into the Jeep and we made our way back to Shreveport and our dogs.

We already miss our little grandson and can't wait to go back and see how much he's grown!  We're already planning our next trip. 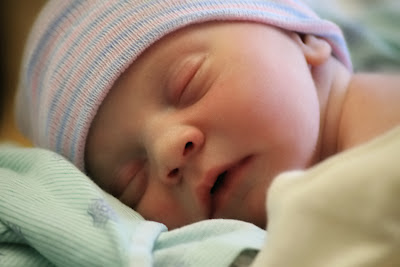 Congratulations, Pat and Steve. I am fortunate that all six of my grandkids are here in town. But I guess 3 1/2 hours to Dallas for a visit isn't too bad.