Twelve Reasons Not to Vote For Obama: Part 1 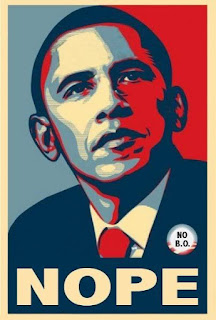 I can't find any good reason to vote FOR Obama but there are lots of reasons to vote AGAINST Obama.  Let's start with these (in no particular order):

2.  The Obama administration sought approval from the United Nations to intervene in Libya, but not the approval of the U.S. Congress.

3.  Want to talk about "outsourcing"?  Up to 80% of the stimulus funds promoting "green energy" went to China, South Korea, and Spain.

4.  The Obama administration blamed the Standard & Poor's downgrade of 2011 on the Tea Party rather than any economy killing Obama policies.

5.  Obama has offered no entitlement reform whatsoever and in fact just last week gutted the work requirement from welfare.

6.  Obama lawlessly decided to ignore immigration laws on the books and announced his administration will not enforce them.

7.  At Obama's urging, the District of Columbia was allowed to fund abortions with taxpayer dollars resulting in some 300 elective abortions before the practice was stopped.

11.Under ObamaCare, Catholic institutions are mandated to provide birth control and abortifacients.

12.Not quite five months after Brian Terry was killed in border violence, Obama declared the Mexican border secure.

To be continued.
Posted by Pat Austin Becker at 3:21 PM

It'll be entertaining hearing you carp for another 4+ years.

The GOP is running out of feet in which to shoot themselves.

You could list many more reasons not to vote for Obama. Like you, I can't think of any reason to support the most corrupt, incompetent, and divisive administration in memory but there are always people like Tony. I worry that there may be enough of them in swing states to reelect this clown. I sure hope that doesn't happen.