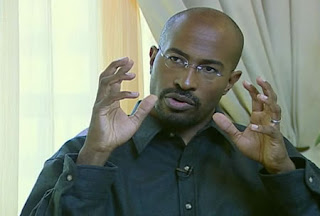 We all saw it coming. The resignation of Van Jones came in the middle of the dark night on a Saturday, calculated that way, certainly, to avoid the headlines of the Sunday papers and buried in the news cycle of a holiday weekend.

And we know how it will play out; he'll be martyred by the left and cries of it being a high tech lynching have already begun from the Daily Kos crowd. The writer who penned that phrase goes on to say:


"This is a high tech lynch mob. Aimed at a Black man. Who dared to get uppity. But they’re not racists. Just ask them."

Give me a break. A cursory look at Van Jones and his writings, speeches, music production, and beliefs reveals why he had to go. He wouldn't even have been able to get the lowest level security clearance in the military should anybody ever have checked him out.

But that's the thing - nobody checked him out. That is, nobody but Valerie Jarrett. She's on record as saying she's been watching him for a long time. She should go, too.

The left will cry racism, Jones will say he's a victim, and the majority of the country will be trying to figure out who Jones even is once it finally hits the papers. If it hits the papers. But the truth is, Jones should never have been hired and examination of many of the Obama czars will show the same thing. The reason they are czars is because they couldn't clear the confirmation hearings. And looking at who has already passed the confirmation hearings, that's pretty sad.

So hit the road, Jones. Take your revolution somewhere else.

For more on this, Robert Stacy McCain was all over this last night with constant updates. Memeorandum has the aggregation for you. Michelle Malkin has the ultimate post on the state of it all right now and how the mainstream media will deal with this, or not.

Posted by Pat Austin Becker at 7:49 AM

Great post...and thanks go to the Glenn Beck research staff on their excellent work on this Jones dude.

Just like when Hercules fought the multi-headed hydra, each time he would cut off one head of they hydra, two more would appear to take its place.