Lying or Inept, or Both? 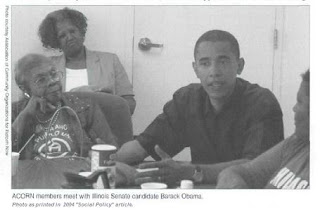 Obama playing dumb on ACORN is beyond belief:

STEPHANOPOULOS: How about the funding for ACORN?

OBAMA: You know, if — frankly, it’s not really something I’ve followed closely. I didn’t even know that ACORN was getting a whole lot of federal money.

STEPHANOPOULOS: Both the Senate and the House have voted to cut it off.

OBAMA: You know, what I know is, is that what I saw on that video was certainly inappropriate and deserves to be investigated.

STEPHANOPOULOS: So you’re not committing to — to cut off the federal funding?

OBAMA: George, this is not the biggest issue facing the country. It’s not something I’m paying a lot of attention to.

I'm getting his point that ACORN "is not the biggest issue facing the country" right now; his domestic agenda is much more on his mind. Afghanistan is pretty important. So is Iraq. I get that ACORN isn't at the top of his list, but pretending that he hasn't followed the story is lame.

As Michelle Malkin points out, Obama and ACORN are inextricably linked and I'd bet my very last dollar he knows what's going on. He's savvy enough in the art of self-preservation that he'd be keeping an eye on the story.

He was okay as long as he stuck with the "not something I've followed closely" line. But when he claimed he didn't know ACORN is getting a lot of federal money, he lied. Did he not read the Porkulus bill? Oh, wait! Nobody did! D'oh! Did he not know ACORN was in line for a census gig? If all that is the case and he is in fact accurate in his colossal ignorance of ACORN, he's far too clueless to be in this position.

So, he's either lying, or inept. Or both.

Oh yeah, the man that is responsible for the national marketing of community organizing and community service doesn't have a clue. Yeah right! What was it Robert Gibbs said yesterday.

Then Obama admits a paragraph later he has seen the videos. He can't even keep is story straight from sentence to sentence.

I gurantee there is damage control going on between Organizing for America, Obama, and ACORN.

I don't think Barry is lying or inept. Sadly, I think its something else, as I explain at TCOTS.