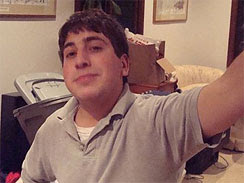 Friday, September 11, 2009, a 20 year old student at Cornell University, Warren Schor, pictured left, died of complications from the swine flu. IvyGate Blog chose the tragedy as an occasion for mockery and silliness.

IvyGate is a blog that purports itself to be a "news and gossip blog that covers the Ivy League" and is written by current and former students. In the past they've covered stories such as the Princeton class president who set a squirrel on fire and more recently, mocking the distribution at Harvard of a pamphlet instructing students not to defecate in the shower.

When Warren Schor died last week, IvyGate published this article, originally under the byline of Molly Fitzpatrick, now under the byline of Adam Clark Estes. The article mocks Schor's death and the administration attempts to encourage students to stay healthy by practicing good hygiene. So intent was IvyGate on its mission of mockery that they couldn't even get the dead student's name right in the original article, first identifying him as "William" Schor, until offended commenters called out the error.

The comments following the article are unanimously offended by the post; one even points out the mysterious change in authorship: "You change the name of the author of the post but yet you keep the disrespectful and inconsiderate tone of it. At the very least get rid of that tasteless photo. Ivy Gate Media should be ashamed. Shame on you."

So why the change of byline? Was Fitzpatrick embarrassed and having second thoughts about her poor taste? Was she pressed to pull the article? Why did blog editor Adam Clark Estes take ownership of the post?

In addition to his responsibilities as editor of IvyGate, Estes is also Associate Editor of Huffington Post Investigative Fund, described by Arianna Huffington this way: "This nonprofit Fund will produce a wide-range of investigative journalism created by both staff reporters and freelance writers." The site considers itself a "watchdog" of sorts, reporting on fraud, abuse, and waste in government.

In June, Estes announced the formation of the Investigative Fund's Health Unit whose purpose is to track the progress of ObamaCare. So why is a Huffington Post editor and one in charge of the Health Unit, mocking the death of a young man with H1N1?

Following the death of Schor, Cornell University officials suspended most social activities for a week in an attempt to quell the H1N1 outbreak on campus and protect the students, a move which Estes saw fit to poke fun of: "[The] Inter-Fraternity Council had instated a weeklong [sic] moratorium on social events to help prevent the spread of the disease. But, due to a flood of flu-related visits, Gannett also has stopped scheduling routine appointments, so they may just be canceling frat parties to avoid the standard Sunday morning rush for Plan B. After the jump—a lesson in hygiene and how your Atari will kill you. "

Estes (or Fitzpatrick) then wrote, in response to administration officials asking students to wash their hands, "you should never take it for granted that a frat house will have soap."

And if the mocking tone and the botched initial identification of Schor were not enough, IvyGate saw fit to illustrate the piece with a photo of a pig and the word "Crap!" over it. Tasteless.

It is unfortunate that Estes and Fitzpatrick, and I'm assigning responsibility to both, chose to mock the death of Warren Schor. The young man has a family that is grieving and a close network of friends. As editor of IvyGate, Estes assumes the responsibility for this post whether he wrote it or not; the change of byline was probably unnecessary.

IvyGate has reached a new low in insensitivity and should respond to the requests of its readers, as well as a common sense of decency, apologize to the family, and pull the post.

Update 3: This morning, IvyGate posted an update to their story. They took down the picture of the pig and replaced it with a "more somber picture" and modified some of the language. I'll let you decide if you think it's an apology of if one is needed:

UPDATE: Some have questioned whether it's appropriate to have jokes in the same post that acknowledges a death. No element of this post mocks the deceased or those grieving—in fact, any humor is directed at the administration and their lack of response that precluded the student's death. However, since we wrote most the post before the death, then updated it afterwards, the tone may now be off. It's our policy never to take down posts, but as a concession we've added a more somber picture and adjusted some language.

From the comments following the post, it's not enough for some.
Posted by Pat Austin Becker at 12:34 PM

What do expect from elitist snobs, many of which will graduate and become "leaders" in our society, although they don't deserve the positions. Most of those pampered little bastards were taught from day one they're extremely brilliant and someone important. The sad thing is they believe it. (This incident proves other wise.)
My thoughts and prayers go out to the Schor family. I'm truly sorry for your loss.

While this incident is extremely reprehensible (and should follow the so-called "journalist" for his career) I think it is a mistake for G.R. to insult the ivy league in such a way. The elitist snobs make up a small portion at all of the schools and are usually treated as equally as everyone else. All of the schools, Cornell included, embody sound and top-notch academics, and produce some of the most brilliant and well-rounded minds in America and the world. It shows your ignorance when you insult such schools for being 'elitist' especially when they have indeed sacrificed large parts of their traditional education just to dismantle that reputation over the past century.

John,
The abandonment of traditional education. That's the problem with most institutions of high learning, as well as elementary and secondary education. Today's students know more about insignificant crap than they do the essentials.
And I do apologize, I should have said a small segment of the student population, meaning the people like those who found humor in writing about Warren Schor's death. I did not mean the entire student population.
I just don't find entertainment and humor in the tragedy and sadness of others, but it seems that there are elements of our society who do, and you can attribute that to the lack of religion and the lack of traditional education.

I won't use the words that come to mind, I'll just say disgusting.

The editor's judgment leaves a lot to be desired, to say the least. The student's post was vile and reflects poorly on the author as well. Students reading were clearly offended and an apology was really in order. Changing the author's name was infantile.

I agree with John's point, painting all students with a broad brush based on the behavior of one and the appalling lack of judgment of the editor is unfair. I happen to think this is something the right does quite a bit lately, for reasons I can fully explain. Most of the kids attending these schools show the qualities we purport to admire as conservatives. Very few have had their lives handed to them, most have worked hard to gain entrance and should be acknowledged for that.

End of rant, my reason for posting this comment was related to the Huffington Post Investigation connection. Yesterday, when the left was in a tizzy over the numbers in DC, another one of these founders was quite involved on Twitter . Jay Rosen was also quite involved with founding this unit at HuffPo and as a journalism professor at NYU, you can only weep for the future of journalism with these shaping the minds of future journalists.

I read HuffPo quite a bit, even their own readers question their journalistic integrity, despite their agreeing with the bias of the site as a whole. With Rosen and Estes involved in the investigative unit, I can only imagine what kind of nonsense is going to come from HuffPo, to be passed off as investigative journalism.