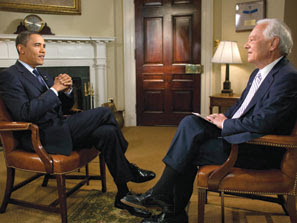 Jennifer Rubin at Commentary puts it best on this one:

Obama, with his years of military service, decades-long foreign-policy experience, and spotless record in opposing the surge in Iraq, is “skeptical” of the military’s troop recommendations on Afghanistan. Oh wait. Hmm. Once again, it seems that resoluteness and willingness to spend what it takes to defeat America’s enemies don’t come easily to the president.

The Politico article to which she refers quotes Obama as saying “Until I'm satisfied that we've got the right strategy I'm not gonna be sending some young man or woman over there — beyond what we already have. I'm not interested in just being in Afghanistan for the sake of being in Afghanistan or saving face or, in some way – you know, sending a message that America is here for the duration.”
There is some debate this morning as to the request for those troops. There have been reports that Obama has asked Gen. McChrystal to hold off asking for those troops for a few weeks; the next question would be "why?" Is it because Team Obama wants to finish the health care debate first? For his part, Obama denies that rumor.

Of course he does.

Obama lamented yesterday the "strategy that had gone awry" in Afghanistan and the loss of "focus." In his great military strategist wisdom, he suggests that our "overarching strategy" should be to capture and kill bin Laden. Why didn't anyone else think of that?!

(H/T: Memeorandum)
Posted by Pat Austin Becker at 9:18 AM

I'm not worried at all. For "O" shall raise his right hand and smite the enemy in the ass with a jawbone. So besides being a racist, are you a heretic, too? Oh ye of little faith.

The new is indicating that the "Great One" is unilaterally decreasing out nuclear arsenal. I am wondering if we will survive 4 years.

So what was all that sound and fury about Iraq being the bad war and Afghanistan the good war?

What the flizz did I miss?