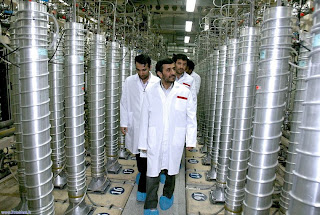 The condemnation of Iran's previously secret uranium enrichment facility is interesting, but not a surprise. I'm a neophyte at these things and even I was fairly certain that Iran was up to much more than they admit publicly. The news that the plant exists is not a shock.

The condemnation of the plant by Obama, Sarkozy and Brown this morning isn't particularly earth shaking either. There will be the usual blather about deadlines and sanctions. We all know how well that will work out.

What I'm wondering about now is Israel. What will they do with this? Ed at Hot Air points out that because the plant is located so close to a holy city, a military strike would be a huge risk: "If Israel hits the enrichment plant, Tehran will scream that it’s an attack on an Islamic holy city to rally the public towards religious war." No doubt.

I'm also interested in how Obama will play this one. He's been appeasing to Iran from the very beginning; he's asked for talks without preconditions, he sat on his hands during the stolen Iranian election, mostly to appease the mullahs, and he has consistently been weak on all matters of national security. If you doubt that just read the current headlines on Drudge. If Drudge changes them before you get there, Bride of Rove sums it up nicely. She's not sleeping so well these days.

Obama will beat his chest and pontificate on how Iran should honor the nuke free agenda that he wants, but in the end, Iran will ignore him and go about their merry way. Any other outcome would shock me.

(More at Memeorandum)
Posted by Pat Austin Becker at 8:49 AM

What would shock me is if our country decided to go John Wayne on these a-rods and handle up on it once and for all. Throwing Israel under the bus will be our undoing.

Oh yea of little faith. We have Obama now, and in case you haven't noticed, everybody loves us now: Chavez, Castro,Qadaffi,and every other tin horn dictator. But like they say, "Birds of a feather..."

You are right about throwing Israel under the bus. Obama may have, but there are a lot of people who still fear God in this country who hasn't.

Next you'll see Obama throwing God under the bus. He can't stand the competition. It may see that Obama omnipotent, but that only because of NBC, CBS, ABC, CNN, MSNBC and not by his own powers.

I'm actually surprised we haven't seen posters of Obama on the walls of every town, reminiscent of Il Duce.

I am with Ron Paul. It seems that we always have a crisis. With "The One's" poll numbers slipping, suddenly we have terrorist trying to cause trouble and now the Iranians up to no good. I for one feel we need two countries with the South seperating from the North as it did in 1860. I would bet the world tension would be less.

If there were to be a separation, you would see more than 13 states. You would probably see 35 or so that would secede, and about 10 more split.

Meanwhile, the citizens of Obamica can continue living with their head up their butts and have unicorns and leprechauns as their national emblems.